Hello! This thread will at first be about talking about when we'll get Skyward Sword's official Box Art from Nintendo. Once there is an official box art, this will become a general Box Art disscusion thread.

I'm actualy not sure when we'll get the game's box art, does anyone know when Twilight Princess got it's box art? With the game being 90 days away in Europe, were bound to get it soon

But Twilight Princess box art was shown off two months before release. for Skyward Sword there is three months left.

I don't know, I'm just gonna wait and see what it is rather than wonder when it will be revealed. (Maybe we'll get it at Eurogamer Expo, though. I also expect it to be a new concept art.)
Last edited: Aug 17, 2011

Well, I hope the box art uses the style that's akin to the official character art.

....Either that or they'll just make the entire box gold.

Okay, Twilight Princess got it's boxart on September 15th, and the game was released on the 11th of November. So we can expect the boxart anywere from now until late september :O

I hope that they don't show any image of a wii motion plus, they should only put a warning. An image that isn't of the game would ruin the box art.

JerônimoLink said:
I hope that they don't show any image of a wii motion plus, they should only put a warning. An image that isn't of the game would ruin the box art.
Click to expand...

What exactly do you mean? There is gonna be a "Wii motion plus required" on it.
Z

We'll get it soon. but I'm not gonna worry too much about it. I mean, the box art doesn't matter, we have a release date, the game looks AWESOME, and the game WILL BE awesome. I say we just... wait.

*folds my arms and waits*

I never really cared much for box art. It was always just paper on a box to me... At least there's a release date; around my birthday, as predicted. Yay...? :huh: 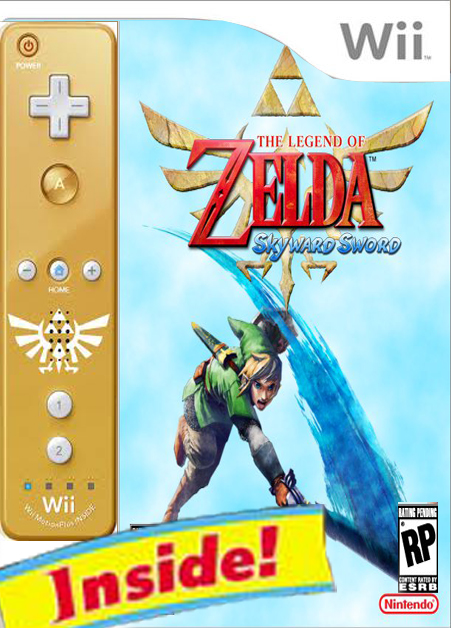 Seriously, Nintendo. Nothing like the above. Give us simplistic box art that reflects the art style of the game and the game alone. I'm rather fond of the Wind Waker and Twilight Princess box art; something in keeping with that would be wonderful.

I hope we get a Golden-ish boxart that we've had since The legend of Zelda and Ocarina of Time.
L

I would also love a golden box art. Like the gold on the paper that comes with Ocarina of Time 3D.

Maybe on the back they could say Wiimote Plus included. I don't want to have the wiimote picture on the front either. They might do it on the back though, if the gold remote is included. I could see them doing that for the back of the box maybe.

There's a Bazooka in TP!

I would much prefer to have a golden plastic case, similar to that of the red case for New Super Mario Bros Wii and later the Mario DS series in red. I really miss the old days of the Zelda games having that special packaging that elevated the game above all the rest. I think, especially since it's Zelda's 25th anniversary, that a golden snapper case is in order. I know TP would be the odd one out in the Wii Zelda-duo then with it's white case, but I still would love for this to happen!

Of course, the paper insert itself should be golden of some kind as well, again in the NSMBW style, because if the spine were white on a gold case it would just look... weird.

I thought this box art was pretty believable. It is fan-made and in no way confirmed, but I kinda like it.

The reason why this is so believable is that it follows the golden box art trend that started with Ocarina of Time. It has the updated logo and dons an important feature of the game on it: Link on his bird. This can be compared to Link and the King of Red Lions on the Wind Waker box art or Link and Wolf Link on the Twilight Princess box art. I wouldn't be surprised if the final product looked similar to this...
You must log in or register to reply here.