So, this Monday, February 21st, marks the 25th anniversary of the Legend of Zelda being released for the NES in Japan.
Do you have any plans to celebrate it? If so, what will you do? Do you think something should be done to commemorate it?

Post any thoughts you have about Zelda's 25th anniversary here.

I just hope Nintendo does something special for us. Maybe more news on Skyward Sword and/or Ocarina of Time 3D or a compilation game.

As for me, I don't think I'll do anything special, but I'd love too. But I do plan to give Zelda some life this year. I'm very very sad to say this, but... I haven't played a Zelda game since 2007 or 2008. But for sure I will play and pass Spirit Tracks, Skyward Sword, Ocarina of Time 3D, and Wind Waker this year. And possibly Majora's Mask. Forgive me Zelda Dungeon. I have a lot of catching up to do.

Hrm... Nothing off the top of my head. I had created a little "25 years" banner. It's about the original LoZ and, well, its 25th anniversary!

I think it is cool that a franchise has stuck around so long. Way to go, Nintendo! I hope ZD posts some sort of special article for the occasion.
D

I knew nothing about this event.
Hard to believe Zelda is 25 yrs old.

WW could have Tetra in her pirate form and in her Zelda form.
Also Medli, a picture of the Deku tree.etc etc.
Lttp could have a card with the seven crystals and the 3 pearld from the light world.
Picture of all the bosses Moldrum,Trunexx,Kholdstare,etc.

For bonus material, they should do as they did with Mario's 25th anniversary, and include a soundtrack with music from each game in the Zelda main series and a neat little history book.

For bonus material, they should do as they did with Mario's 25th anniversary, and include a soundtrack with music from each game in the Zelda main series and a neat little history book.
Click to expand...

I totally agree with you, but I doubt they will put Link's Awakening because then no one will buy it on the 3DS's Virtual Console. But yes, I would seriously love to have all of Zelda's great music in one disc. But it would certainly give the DS some life before it finally dies.

This is going to sound silly, but I want a hat. I want an official nice awesome well made Link hat. I know you can make them an all but still. It would just be amazing.

I also wouldn't mind having the OOX's for DS. Even though I just started playing them. I would actually like a bit of merchandise than a special addition game. I remember they had LoZ lunch boxes. Too bad I didn't get one. I also wouldn't mind seeing this around. 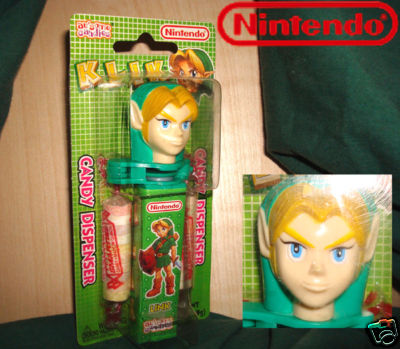 Or maybe a model of Hyrule castle..
Hey look I found a picture of it! 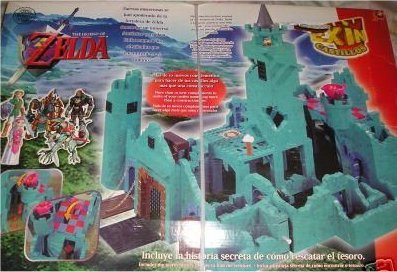 You can still buy those Klik dispensers, Hot Topic sells them.

Compilations have also been released before. there was the OoT and Master Quest double pack and the Collector's edition on Gamecube a few years back. As well as the re-releases of LoZ, Aol, ALTTP, and LA on Gameboy Advance around the same time.

What I would love, but I doubt will happen, is a compilation collector's edition hardcover book. Covering everything from developer's quotes, notes, and art from all the titles ranging all the way back to the original LoZ. Also including behind the scenes info on dropped concepts from games or dungeons that were deleted from the final edition. Maybe have the Hylian alphabets in one section, some information covering the recurring monsters and bosses of the series, a few maps of Hyrule, and some extra info on things like the Sheikah and Gerudo that never made it into a game story. Then a few reviews covering all the games and how they performed in Japan and NA,

I love deep insider information from creators on how they came up with these concepts and why they chose the designs they used.

Some more of these kinds of things Warrior of the Past

It's not like Nintendo will actually do anything concerning games, but maybe they will release music or concept art! For those who got Metroid Prime Collector's addition, you saw how awesome that packet filled with pictures and drawings of concept art were. And on the flipside, there was the whole Metroid Prime epic! Of course the Zelda version won't come with a timeline (I wish), but a packet like that full of concept art would be amazing.

And 25 years, wow! I didn't realize it was so long ago! Did I mention... party! Maybe someone could bring that cake that ZREO is offering for a donation to their Twilight Symphony project. We just need plates, I'll bring the Chateau Romani!

I might advertise it at school (wear a homemade t-shirt, tell everyone, maybe pass out some type of candy or knick-knack, something.)

Too bad Nintendo didn't release a 25th anniversary edition Zelda compilation with updated graphics for the Wii like they did for Mario's 30th. I was disappointed that it was just a re-release of Super Mario All-Stars which I still have for the SNES although the cartridge has a dead battery. :S

Pretty intense that it's gonna be 25 years. I probably won't do anything, though... maybe just play Zelda for a bit.
H

My site (Zelda Eternity) and Zelda World are hosting a few streams this weekend to celebrate the anniversary. Today we're playing Oracle of Ages, tomorrow we're playing Ocarina of Time and on Sunday we're playing the original Zelda. If you've got nothing to do, you should definitely come check it out.

Click here to view some information about it, as well as a link to our stream page.

I'm going to be on vacation but I'll play Spirit Tracks and make some YouTube videos when I get home. HAPPY BIRTHDAY, LEGEND OF ZELDA!!!

It'S Zelda's 25th birthday on Monday? My plan: play Zelda most of the day when I get home! And also on the bus!
You must log in or register to reply here.