What Do You NOT Want in SS?

If SS takes place before OoT, then I don't want Sword Beams. They have been announced, but they haven't been proven yet.
W

VanitasXII said:
Lastly I don't not want the magic bar to appear (I want it to come into the game!). Without a magic bar, it makes Zelda too realistic and we know the series is magical...
Click to expand...

Having a magic meter makes the game realistic actually, as it provides a logical reason as to why Link can do some of the things he does with magical items. You know, it's not realistic to think Link suddenly doesn't need magic (meter) to use...well...magical items (as in Twilight Princess).

Example, if you played TP, you would most likely remember the Spinner. Well, what energy does the Spinner run on? It would be logical (and realistic) to think that in Link's universe, the Spinner would run on magic, but then where's the magic meter?! Answer: There was no magic meter in TP. Well that's not realistic...
Oh yeah. I agree that there needs to be a magic meter implemented into Skyward Sword. Though, in my case, I think it would give us a logical reason why Link's magical items can do stuff; magic is their "feul" after all. However, when you think about it, the Stamina meter(?) might (effectively) replace it...in a way. Hmm... /rant

I hope they don't take out the magic meter...

Instead of saying that the I don't want the game to be too easy (what is quite vague), I'll be more specific: Regardless of the actual difficulty, I don't want the game to abuse of potions as seen in the demos, I mean, it's okay to make Link take more damage and use more potions due to it. But I don't want to see Link using potions all the time. It's just not moody. Related to that, I hope that the player will acquire these potion slots/empty bottles with hard work.
M

i don't want a couple of things:
1.i don't want that the game will be too easy.
2.i don't want link and zelda having a high-school romance, that will be totally moronic thing to do and it will screw up the story of the game and make it just a typical fantasy story.
3.i don't want the game's items to end liken TP where you only use the item for the specific dungeon. it simply takes all the fan of using a cool item if you don't have whey to use it.
4.i don't want sword fighting to get repetitive. it could get repetitive if all what your going to do is slice at the direction that you see, it should be more interesting from that.

overall i think that nintendo did exactly what it should do with the game: the sword combat looks interesting, the item upgrade system will likely keep the item from getting old and he game looks kinda hard. I'm still worried about link and zelda's relationship thou, i hope nintendo won't fall into that trap.

ditto. they better have darknuts that dish out at least 10 hearts damage, and actually hit you.
wait. i'm planning to play this with three hearts and no shield...
this will be fun.
B

- Like most of you already said I don't want this game to be too easy. A 5-year-old should not be able to beat this game, let alone the first dungeon of it! More specifically, I don't want huge and epic-looking bosses... that only deal 1/4 heart damage per hit and have huge flashing mega obvious weak spots (fx eye) which are easy to hit with the respective dungeon item. Of course I don't want them to be insanely hard though like fx in Shadow of the Colossus (I never even got past the first boss there).

- I also wouldn't like it if after she had been captured by that whale thing, we didn't get to see Zelda anymore until the very end of the game.

- Another story element I'd totally dislike would be the following situation: After Zelda is captured, Link gets all the blame for losing her, possibly because that other bully guy is telling lies and therefore Link has to prove that he's not guilty, similar to Mario's situation in Paper Mario when he goes to that ice town. That would just be too predictable and cliché.

- No Wii Sports Resort 2.0 with the name Zelda slapped onto it! I don't want the motion controls to feel like a mere gimmick or tech demo used mainly in mini-games or only once per enemy/puzzle type.

- Not too many elements of modern society. Having Link as a student in a flying school is still borderline OK for me, but please no soap-opera style romances, midlife crisis, depressions, bigger companies, slums etc. I want this game to retain the "epic medieval" setting which the previous games had.

JamesBond007 said:
If SS takes place before OoT, then I don't want Sword Beams. They have been announced, but they haven't been proven yet.
Click to expand...

Sword beams have been proven? Could you give me links to the videos with them?

Location
In a forest

Magic Meter.
Not trying to troll, but we already have a shield bar that goes down after each hit it takes o.o And stamina

JamesBond007 said:
Sword beams have been proven? Could you give me links to the videos with them?
Click to expand...

I had to rewrite the first and last paragraphs because my mom closed the reply window while I was gone (for the first paragraph), and the page froze when I clicked on the image button for the last paragraph, so I apologize in advance if these two paragraph look somewhat sloppy.

There are quite a few things that Nintendo could do to mangle the Skyward Sword experience. The first of these is the visuals. Before Skyward Sword's E3 2010 Trailer, I was greatly anticipating any news or footage of the game, hoping that it would be more like Twilight Princess (except with a much higher difficulty). My ideal Zelda game at the time was a game much like Ocarina of Time or Twilight Princess, one with realistic visuals, beautiful scenery, the classic Zelda feel, and an epic final boss battle that would far exceed those of OoT and TP in terms of grandeur. Taking a single look at Skyward Sword told me that it wasn't going to be that sort of game.

I remember first viewing the E3 2010 Trailer like it was yesterday, and I remember even more clearly how my heart sank when Link made his appearance, clutching his sword while it was still sheathed. I was severely disappointed by the visual blend of Wind Waker's cel-shading and Twilight Princess' realism. I love both those games and their graphics immensely, but I was really expecting something much more ambitious from Nintendo. I was really expecting Nintendo to craft a game with visuals with as much detail as XBOX 360 and PS3 games. Seeing the improvement from the Wind Waker to Twilight Princess, I assumed that the next Zelda game would have a graphics engine that's nearly as powerful as those of the games on other current generation consoles. I was wrong about this, but I've come to appreciate Skyward Sword's visuals. My "pretty Zelda game" dilemma disappeared with the announcement of a revamped and refined Twilight Princess with the Wii U, so I really have no problems with SS' cel-shaded graphics. That last statement is especially true since Nintendo decided to turn SS' brightness down a shade to make the game "darker".

Instead, my concern is mainly for the art direction that Nintendo may take for enemy design. Enemies and characters I've seen so far have been rather cutesy and harmless looking, much like those from the Wind Waker. However, I love the Wind Waker's visual style, but I really do prefer more realistic characters and enemies. This doesn't really detract too much from the game, but hopefully Nintendo will decide to place some more threatening and realistic enemies in the game to make the game seem less childish. 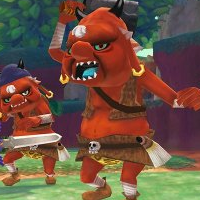 Another issue that could arise in Skyward Sword is easy difficulty. Wind Waker and Twilight Princess, the two most recent home console Zeldas, have both been cakewalks. Nintendo shouldn't be so foolish as to make such a mistake again (especially when they claim Skyward Sword will be the best Zelda so far, or else they'll stop the franchise). The fact that Nintendo would say such a thing somewhat restores my hope for the game's difficulty, and if they've been listening to their fans, they'll comply.

One last thing is this: Ghirahim can't be a wimp like Zant was. Sure, Zant was an intriguing character, but didn't completely fulfill the role as TP's most menacing villain. Ghirahim honestly doesn't look so fierce, he looks rather like the opposite. What made past Zelda games so epic and magical were the villains. If it weren't for Ganondorf, Twilight Princess would've been a lot less impressive (though Ganondorf was not sewn so well into the story). Some critics that have played Skyward Sword in advance have commented on Ghirahim, calling him an interesting character with a unique boss battle that is unlike any other in the Zelda franchise. I sincerely hope that Ghirahim's boss battle and the entirety of Skyward Sword will have an exciting atmosphere and feel epic. Honestly, I expect Skyward Sword to be almost (or somewhat) as legendary and heroic as Ocarina of Time felt, or else I would consider the game's feel to be below my expactations.

I don't want Items that we use once - IN THE DUNGEON. Examples, after you got the Sand Wand in Spirit Tracks it had no use except for in the Dungeon. How about the Dominion Rod from Twilight Princess? Sure, you used it to get to the City in the Sky and in the dungeon, but after that it was a piece of trash. I want Items that we use repeatedly. I mean the Hookshot/Clawshot is the most used item in Zelda history. In Ocarina of Time you get a whole upgrade for it which shoots it twice as far. In Twilight Princess you get TWO Clawshots. I want Items like this.
Another thing I would rather not have in Skyward Sword is weak puzzles. Twilight Princess was rather easy with Warping and Midna constantly telling you where to go. So the game in general (without 100% completion) was generally easy in my opinion. I want challenging puzzles with epic battles.
One more thing I don't want in Skyward Sword is obvious events. Okay, some obvious events in Zelda History is... The Chancellor in Spirit Tracks was the Demon King (DUH), or that time in Ocarina of Time it was obvious that Link wasn't a Kokiri. I mean Saria even says it at the beginning of the game. I want suprising things like when Sheik was revealed as Zelda - I was like OMG. Yeah but not to suprising though, like in Twilight Princess when Zant was the main antogonist then Ganondorf just suddenly became the villian. That was just plain stupid.
Yeah so that's just my opinion on what I would rather not see in Skyward Sword

Please let's not make this thread a general complaint or nit picking thread.

I think that even if the game come with some drawbacks (like a lack of a proper Hyrule field or having the land below too compact), it can surpass our expectations by doing great in his strong points, like the combat/1:1 controls, good story and the bird exploration.
You must log in or register to reply here.