The Death of Rasul due to the evnts of Dystopis sent Rasul to the Land of The Dead, where he must atone for his sins by defeating Literal demons in a Gauntlet that will have him bounce around the Timelines of Zelda. so lets begin

Name:
Age: [Not the Age you died. the Age you were at your peak, or when you met Rasul]
Race:
Class:
Sub-Class:
Height:
Weight:
Eye Color:
Hair Color:
List of Weapons
-
List of Items
-
Skills:
Element:

Rasul Kazad, the Son of Lazulene Kazad and some elf male. The Grandson of Murdol The Hammer. Commander of the Shiekah, Avatar of Rikuconis, The Dark God, Mr. Blue. Many names, many stories but All Him

His Death in the Fields of Hyrule in 1776 ADOD left his Soul in Limbo. his soul not being able to Rest

Name: Alwin "Mr. Red" Nutt
Age: 63
Race: Daemon
Class: Soldier
Sub-Class: Bodyguard
Height: 6'2"
Weight: 170lb
Eye Color: Red
Hair Color: Black
List of Weapons
Shortsword
Glock 18, "Widowmaker"
List of Items
Toyota Corolla, "Lola"
Locket
Skills: Good shot with any form of firearm; swordfighting; planning
Element: Fire
Personal Song: Which RP are you from?: HAFU; The Return
Backstory: A young boy from the streets, he was taken in by the castle guards at a young age. He developed a close friendship, and then a relationship, with the princess in secret. Upon her coming of age, the two planned to rebel against her abusive father and ascend to the throne together. Unfortunately for them, the paranoid king learned of their treachery, and Alwin was to be executed for treason. He was tortured for days, to teach a lesson to his lover, before he was rescued by a few friends and sent to Earth.
There, he met the expatriot elf Bela'khun Vandraste, who months before had caused the King's paranoia by kidnapping his young son, a boy named Gabriel. Alwin was angry at her for leading to the breakdown of the revolution, but respected her for wanting to keep the boy from his father's corrupting influence. Stuck together on Earth, they decided to stick together and raise Gabriel together until Alwin could find a way home. They opened a bar together and lived their lives. Over this time, Bel developed feelings for Alwin, who ignored them to cling to his memories of the princess. The two were soon approached by members of the Order of New Camelot, who offered them a way home in exchange for fifteen years of service to their organization. While Bela chose to stay behind, Alwin agreed, and they split up, keeping in occasional contact.
Near the end of their tenure, a group of mercenaries showed up to take back Gabriel. Alwin was able to convince them to give up, but they returned later still explaining that Gabe's father had died, and they were there to take the boy to his funeral. Alwin gave in, so long as he and Bela could come with. Taking leave with his employers, Alwin went home.
Last edited: Jul 10, 2018 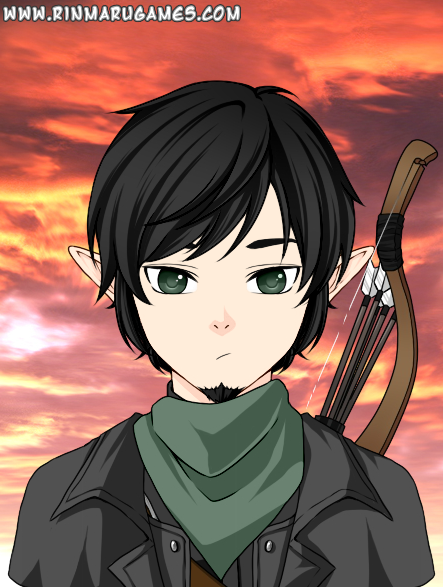 List of Weapons:
- Bow of Mudora
- Kusayami
- Bomb Bag
- Grenade Bag
- Mine Bag
List of Items:
- Rope
- Smoke bombs & flash bombs
- Disguise Box
- Octo Balloons
- Grandmother's Scarf
Skills:
- Pro level archery
- Decent wind magic and sword skills
- Master of disguise and stealth
- Smooth talker
- Agile, flexible and athletic mother****er
Element: Wind
Which RP are you from?: The Light Invasion, Gatewatch, Shadows of the Twilight
Backstory: Grandson or Linora Braon and Rasul Kazad. Son of Rengo Kal Braon Kazad. Rengo Rex first made a name for himself when he initiated and lead a rebellion to successfully overthrow the Lord of Light. A couple of years later he traveled back in time and joined the Gatewatch on their journey until he went back home to Hyrule and served his country by laying down his life during the Twilight Invasion of a timeline different from the one he was originally from.
Last edited: Oct 30, 2018

Name: Septimus Alvin Lenholdt
Age: 28
Race: Hylian
Class: Spellsword
Sub-Class:
Height: 5'11"
Weight: 180
Eye Color: Brown
Hair Color: Blond
List of Weapons
- Shortsword
- Knives
List of Items
- Rune Sleeves
- Grappling Hook
- Family Tabard
Skills:
- Well-versed in Diplomacy
- Limited to the use of rune magic solely; unable to use any other form of magic.
- Master Swordsman
- Adept Monster Hunter
Element: N/A
Which RP are you from?: Realmwalker (V)
Backstory: A career soldier and member of Hyrule's royal family at the time of Ocarina of Time, Septimus was but one of the casualties of the infamous Realmwalker Event. Ordinarily a man of few words, Septimus was a man of action, most of his words tending to reflect his dark sense of humor outside of diplomatic scenarios. While not always the most personable of individuals, Septimus had mostly been a valuable ally in life.
Last edited: Jul 22, 2018
You must log in or register to reply here.
Share:
Reddit Pinterest Tumblr WhatsApp Email Link