Title says it all. Do you have any ideas for the next Zelda games? They don't necessarily have to be related to current games or the timeline.


This is one I found on r/Zelda: 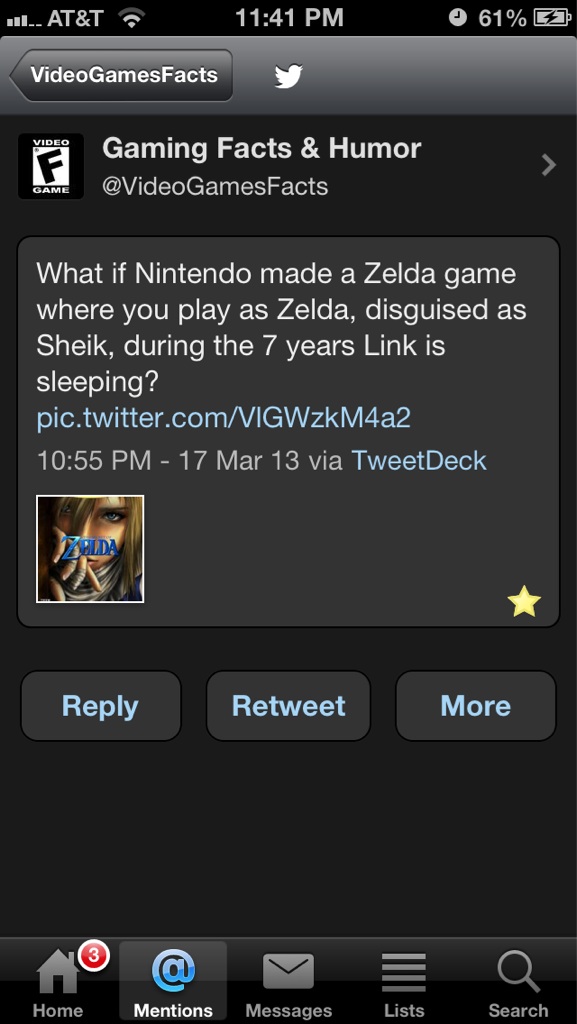 Look at my strategy/ boss battle/ all-incarnations game thread. I didn't get a single comment.

Wow, I love the Sheik idea. It could be like a canon spin-off game, not to sound contradicting. The all-incarnation strategy battle game would be a good spin-off too.

I would want to see a sort of Sheikah-themed game where the main antagonist is the guy from OoT who lived above the well/created the Shadow Temple/the guy featured on the wanted posters in the Hidden village in TP. Not a very well-developed idea but the best I can do right on the spot.

Too many.
One is that evil knight who is aware he serves Ganon but is seeking to get rid of him and Link's rival, the favorite boy of Hyrule, turns evil at free will.
One is Link getting sent 20 years into the future where Hyrule is ruled by the son of Vaati and Zelda, so he has to find a way back in time to prevent this future.
Another is Link arriving at Southern Hyrule and sets out to save Zelda's cousin as a faction sets out to revive Demise's dragon pet to allow it to destroy Hyrule.

That's just three of them.

I have few ideas, a game at the beginning of the Hero fails timeline before alttp, where you are zelda trying to seal ganondorf. This is very reasonable since is says in HH that the 7 sages, led by zelda sealed ganon. I'd really like to see this game because it would make more sense of the very controversial death timeline.

Another game I think would be interesting is one between majoras mask and twilight princess. They blend together pretty well, but when i started my second playthrough of majora's mask today, At the part where link flashes back and remembers zelda, zelda tells link that she knows that link will be returning to hyrule. I want to see how he gets back and why. And why he becomes the hero shade.

The last game that i've been thinking about is one after four swords explaining what happened to the four sword, where did it go and why does it magically reappear after hundreds of years in four swords adventures? And telling if the four sword/picori blade/ and master sword are one and the same or not.

what do you guys think?

xkillinuguyx said:
I have few ideas, a game at the beginning of the Hero fails timeline before alttp, where you are zelda trying to seal ganondorf. This is very reasonable since is says in HH that the 7 sages, led by zelda sealed ganon.
Click to expand...

Yeah, a game during the Imprisoning War would be really cool.

An elaboration on my former idea, I've always felt like the Sheikah throughout the games always seem like the sole survivors of some great catastrophe. Like the whole Hidden Village and Shadow Temple and stuff always leads you to think something must have happened. So having a game set during one of these catastrophes would be interesting. And Link could possibly be born Sheikah.........:blank:
You must log in or register to reply here.