Albums You Can Listen to Front to Back

For me off the top of my head:

Meteora, Living Things, and Hybrid Theory by Linkin Park
First Born by The Plot in You
Of Mice & Men's self titled album
To Whom it May Concern by Sylar
Around the Fur by Deftones
City of Evil by Avenged Sevenfold
Count Your Blessings and That's the Spirit by Bring Me the Horizon
Swan Songs by Hollywood Undead
Born to Die by Lana Del Rey

Was not aware this was an unusual phenomenon? I listen to albums all the way through a lot. If there's a song on there I don't care for as much as the others, I just listen to it. Sometimes in order to get "the full picture" you gotta listen to the album in its intended format. Shuffling playlists is good, but it's very fulfilling to take the occasional break from it and listen to an album or three in their entirety.

Probably not all of them but, excluding EPs, the ones I've been going through most recently--

Satan said:
Was not aware this was an unusual phenomenon? I listen to albums all the way through a lot. If there's a song on there I don't care for as much as the others, I just listen to it. Sometimes in order to get "the full picture" you gotta listen to the album in its intended format. Shuffling playlists is good, but it's very fulfilling to take the occasional break from it and listen to an album or three in their entirety.
Click to expand...

For me if there's just 1 song I don't like off an album it ruins it for me for some reason. That's why I like it when I enjoy every song off an album so I do get the full experience and enjoy it from beginning to end. The Flood by Of Mice & Men would be on my list if it weren't for Ben Threw lol


Satan said:
The Whole of the Law - Anaal Nathrakh
All Our Gods Have Abandoned Us - Architects
White Noise - PVRIS
Click to expand...

I forgot about those albums, both of them are amazing. Lost Forever // Lost Together by Architects would be on there for me too.

Meatloaf - Bat out of Hell II: Back into Hell


Many more but cant think of them.

Other than an Eagles Greatest Hits album, the studio album I can listen to front to back is Supertramp's Breakfast In America. That record is pure gold

Moving Pictures - Rush Not as Legendarily moving as 2112, but Moving Pictures has YYZ without a doubt one of the most thrilling Hard Rock/Prog Rock Instrumental Tracks, It's a shame that the song Tom Sawyer always seems to be the song most non-fans condense the music of Rush down to.
Last edited: Jun 25, 2020

The first Maiden album I bought, and have been hooked ever since. It's an absolute burner of an album front to back. I love this album so much, that I listened to the CD so much that it stopped working, I burned a copy, that copy stopped working, and I bought this album on vinyl.

Song Highlights: "Aces High," "2 Minutes to Midnight," "Flash of the Blade," "Powerslave," and the 13 and a half minute monster, "Rime of the Ancient Mariner."

If you asked me what would be my all time favorite album in terms of production, songwriting, songs, and such, it'd be this one. My God, this album is amazing.

It's the Irons only concept album to date, and man, every song is perfectly written. I've also bought this album several times because my copies stopped working, and I purchased this album on vinyl.

Song Highlights: All of the songs are highlights. They're all awesome.

In case if you haven't noticed, Iron Maiden's my all time favorite band, so it's no mistake that three of their albums are albums I can listen to all the time.

Out of all of Maiden's artwork, this one has to be my favorite. You have their mascot, Eddie, as a bounty huntin' cyborg set in a sci-fi setting, with a bunch of easter eggs for Maiden nerds like myself, as well as 1986 pop culture shout outs, like Blade Runner.

Again, I've purchased this album so many times, and I have it on vinyl. In fact, one of the songs on this album ruined the Deja Vu meme/song for me, because Maiden's song, "Deja Vu," is far more b*tchin' if you ask me.

Song Highlights: "Caught Somewhere in Time," "Wasted Years," "Heaven Can Wait," "Stranger in a Strange Land," "The Loneliness of the Long Distance Runner," "Sea of Madness," and "Alexander the Great."

The fact it's also telling a horror story written by the man himself, King Diamond, wrote himself makes it even more metal. 18th century gothic horror to be precise.

Song Highlights: I love every song on this album. My personal favorites are "Omens," "Abigail," "A Mansion in the Darkness," and "Arrival."

My third favorite band here, and what I believe to be their best album. While Death's never released a bad album in my eyes, this one is the peak of the mountain.

Song Highlights: Definitely "Crystal Mountain," and "Symbolic." Every song is fierce, but those two are just heavy.

This is Megadeth's best record, by far. And my personal favorite record in the thrash metal genre. While Megadeth's not my favorite thrash band, this album is just amazing.

Mostly because it has one of my all time favorite guitarists, my second favorite to be exact, Marty Friedman, who's lead guitar playing just adds that spice, attitude, nastiness, and awesome exotic melodic sense that this record could not do without.

I love Judas Priest, well, barring the stint where Rob Halford wasn't with them and their album Turbo. Seriously, don't bother.

Judas Priest has been an influence on loads of speed metal bands, and the forefathers themselves wanted to show these young pups how it's done.

It's definitely Judas Priest's heaviest record in my opinion, and I especially love the guitar tone that Glen Tipton and KK Downing got on this record. It's fierce, it's heavy, it slices like a razor.

Halford's vocals are awesome, delivering notes that should be impossible for a male, and Ian Hill's bass work is solid, adding the necessary girth to the guitars. And the drummer is a freaking animal. I think he was that missing bit if spice that the Priests needed.

WITH ODEN ON OUR SIDE - AMON AMARTH:

While everyone goes nuts over the Vikings with their new stuff, I personally think that to this day, this album remains the best one they've ever written.

When I first bought the CD, I popped it into my car and instantly, it was LOUD.

That's a good thing. But mostly the songwriting here is Amon Amarth at their strongest.

Song Highlights: "Valhalla Awaits Me," "Runs to My Memory," "Asator," "Hermod's Ride to Hel - Loke's Treachery Part 1," "Gods of War Arise," and "Cry of the Blackbirds."

STORM OF THE LIGHT'S BANE - DISSECTION:

Dissection might be my favorite black metal band. Now, I usually find black metal to be a silly genre, as you have many what I would call, "Edgy Satanists/Atheists," who take themselves far too seriously.

Sometimes so seriously that they're willing to commit arson and murder....

Ask me about the band Mayhem sometime.

But the biggest offender to me, as a musician, is that far too many black metal artists' albums sound like trash, where I can't hear the guitars, the bass is nonexistent, the drums are way too loud and sound like tin cans.

Further, many black metal bands have no sense of dynamics. It's all tremolo picked guitar riffs, screeches, and blast beats.

Dissection set themselves above that horsesh*t and just wanted to create music. They happened to create black metal, and as a result of just wanting to make killer f*cking music that's heavy, melodic, and dynamic.

This is the standard that all black metal musicians should hold themselves to. I'm listening to metal here, I expect heaviness, and I understand that black metal should sound a bit "cold" for lack of a better word.

Well Dissection on this album showed that lo-fi doesn't mean "sounds like ass," and that yes indeed, black metal can be heavy, it can also be melancholic, black metal can also have amazingly dynamic and melodic songs.

Anyhow, rant done. With enough waffling from me, this album is great.

Ah, my favorite power metal band, which was born out of the lead singer of Blind Guardian, Hansi Kursch, and the rhythm guitarist of Iced Earth, Jon Schaffer.

And this is a musical marriage that I felt was just about perfect.

Every song kicks ass on this album. Hansi's vocal performance is just stellar, and these are some of the heaviest guitar riffs that Jon Schaffer has ever written, yes, even heavier than the ones in Iced Earth.

Song Highlights: "Heaven Denies," "Poor Man's Crusade," "Blood On My Hands," "Tear Down the Wall," "My Last Sunrise," and the best song on the record by far is, "Fiddler on the Green."

METSUTAN - SONGS OF THE VOID - WHISPERED:

If you haven't heard of Whispered, then what are you doing with your life?

Imagine a death metal band that only sings about Japanese Shinto myths, samurai, and Japanese history.

Yes. It's as rad as it sounds.

Song Highlights: "Strike!" "Exile of the Floating World," "Tsukiakari," "Bloodred Shores of Enoshima," and by far, the best song on the record is, "Sakura Omen." It's so beautiful, chaotic, brutal, heavy, and melodic. My all time favorite guitarist is Steve Vai. His touch, his phrasing, his technique, and how unique his playing is just is something I can only hope to achieve.

And of course, I had to include my favorite album from my favorite guitar player, ever, Fire Garden.

The sheer dynamics, the tone, the joy, and the sheer amount of fun, despite the seriously insane playing going on just makes this album so enjoyable for me. 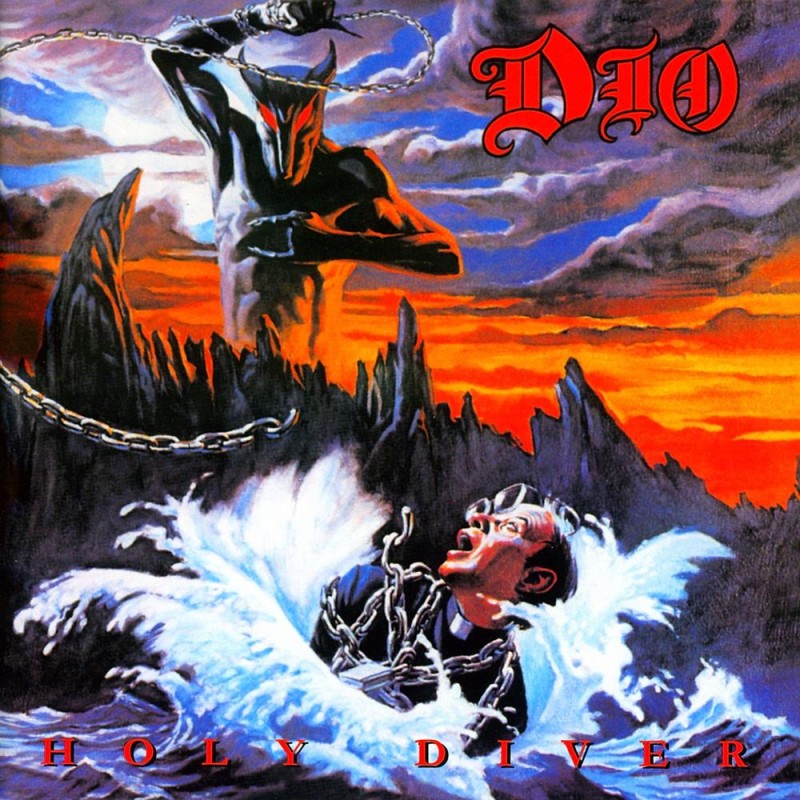 My list of albums that I could listen to all the time wouldn't be complete without my fourth favorite music artist of all time, Ronnie James Dio (RIP).

While I could have put all of Dio's work and called it a day, Holy Diver is the most accessible, and, still Dio's best album still to this day.

I've listened to this album so much, that I've got several versions and only the vinyl version still works. In fact, the vinyl sounds infinitely better.

Song Highlights: You're kidding right? Every song is beautifully written, and Dio's lovely pipes are present throughout. My only regret is that my fifth favorite guitarist ever, Randy Rhoads, hasn't ever collaborated with Dio.

And that makes me sad.