A while back, ZU posted about two interesting recipes by The Geeky Chef originating from the Legend of Zelda Universe:

I personally think that these recipes are worth trying, and would like to share them with all of you.
Thus, I am posting up both of these recipes here so that you can all see. 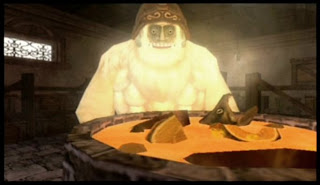 The Geeky Chef said:
So I think I've done some of the more well-known fantasy foods, all of which have been sweet, so now it's time to change it up a bit and do a more obscure and savory dish. This one appeared in the newest Zelda game, Twilight Princess, in the Snowpeak temple as a soup that Yeto makes for his sick wife, Yeta. The soup, thanks to it's reekfish base, has healing properties that increase as Link finds more ingredients to add throughout the temple, namely a pumpkin and goat cheese from Link's hometown, Ordon. I took a basic pumpkin soup and made some modifications. I decided to make the fish stock and the filet optional because while I think pumpkin and goat cheese are a match made in heaven (or Hyrule), fish and pumpkin and goat cheese might seem like a strange mix for some. Fish or no fish, this soup makes for a perfect winter dinner!
Click to expand...

½ c. Goat Cheese or as desired

Château Romani
---
(Original Appearance: Majora's Mask, The Milk Bar)
*NOTE: THIS BEVERAGE CONTAINS ALCOHOL (You may choose to leave it out) 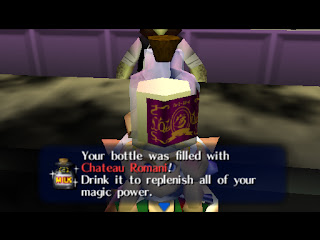 The Geeky Chef said:
Zelda is my all time favorite video game series so I'm pretty excited to be posting another Zelda recipe. My Zelda love extends pretty far. Let's just say I did something permanent to my left shoulder in the shape of the Triforce. Personally, I think Majoras Mask is the most underrated Zelda game. Sure, it's a little weird (even for Zelda) and there's only four temples, but the level of interaction with the townspeople is massive. When I played it for the first time of many I spent hours just following people around and learning their routine and their stories, I didn't actually even try to complete the main questline for months. This particular recipe, voted for by you guys, is for a type of milk that only appears in this particular Zelda game. It's difficult to obtain in the game, both ways being pretty time intensive, but the result is definitely worth it as it's even better than Lon Lon milk. It comes from Romani Ranch, which is owned by two cute redhead sisters, Cremia and Romani (who both look suspiciously like Malon from Ocarina of Time), with some very special cows. It delivers exclusively to the Latte Milk Bar in East Clocktown, for only the most wealthy of people. The stuff sells for 200 rupees so you need to upgrade your wallet to even think about purchasing it, and that's only if you manage to save the cows from alien abduction. Chateau Romani will fully replenish your heart bar as well as give you unlimited magic, although it might make you a wee bit tipsy... making it absolutely perfect for boss fights! Keeping all of this in mind, the recipe I've come up with is for a super creamy delicious and decadent milk drink that infuses regular milk, french vanilla ice cream (has to be French, I mean it's called "Chateau" Romani) and Baileys Irish Cream, as well as a little carbonation to give you that energy boost. The result looks just like it and is pretty darn tasty if not a little fattening. But, remember what Cremia said, this drink is not for children. Or you can just take out the Baileys, then it totally is.
Click to expand...

I have not attempted them myself yet, but I plan to do so soon.
If anyone else tries them, be sure to come back here and share your thoughts!

Amazing! I'll be having the Chateau Romani for my 21st, methinks. (The 28th)... I'll report back then.
The soup... not so much, haha. They're all such strong flavours, and I like none of them that much....

It gets me thinking... what other Zelda-themed dishes would be possible? I can't think of any off the top of my head, but it's food for thought. (One of my better puns, no doubt.)

Yum! Those sound good! I'm gonna mark this page, so that I can come back to it and try those recipes.

Haha, the Cheteau Romani. That must be some pretty strong stuff to give Link unlimited magic...

I'd try the Cheteau, and I am of legal drinking age, unfortunately the current medication I am on does not allow for alcohol consumption.
O

Of course I want to try the Chateau Romani, but supurb soup looks pretty good too! I mean, it healed a yeti- that's pretty powerful
W

Bleh! At the Chateau Romani; not my cup of tea (or alcohol :p). I'm partial to the soup, though. Sounds like it would be delicious (minus the pumpkin?).

I'd actually be down to try both of these LOL but im pretty sure you'd need a more fishy fish for the pumpkin soup....after all Yeto DID add Reekfish to the soup LOL but for taste reasons I guess a white fish and a fish broth would be okay too....sounds delicious
S

OcarinaMaiden said:
Of course I want to try the Chateau Romani, but supurb soup looks pretty good too! I mean, it healed a yeti- that's pretty powerful
Click to expand...

Yeah. I wanna try them both too.
L

I'll try the Chateau Romani without alcohol cuz I'm almost 11 and I think you should try and figure out a recipe for the Punmkin Soup from Skyward Sword!

Location
The Hall of Darkness

I would try the Chateau Romani with alcohol as I am Canadian and 19 years of age, but maybe with out alcohol first as it may taste better without it.