Alright guys, I need to let off some steam here for a second...

We're all pretty much aware of this by now, thanks to gaming critics on the internet. If you aren't, well, there are plenty of videos to help inform you (a warning that some may contain explicit language):


One of the most infamous videos by TotalBiscuit: https://www.youtube.com/watch?v=QfgoDDh4kE0

AngryJoe's Follow up, a bit more meticulous and well thought out: https://www.youtube.com/watch?v=QAi81_uvztM

JWittz's issues with the horrible system. If you are looking for a more G rated explanation of the flaws of YouTube, go here. He goes less into Content ID, and more about account strikes, but it still reflects the terrible flaws of YouTube's system: https://www.youtube.com/watch?v=uiuKWM8nqxw
Many different mediums have been effected by this nonsensical Content ID system, and its completely destroying the YouTube community. Even if it has seemed to settle down and you may be thinking "Nobody is complaining anymore, it must be fixed, right?" WRONG

Just a few days ago, I put a song onto YouTube. Its called Under Sheets of Iron, I'll put a link here: https://www.youtube.com/watch?v=0JRR9l5X3mc

I do that so you may listen to it and draw your own conclusions about what I am going to point out next. 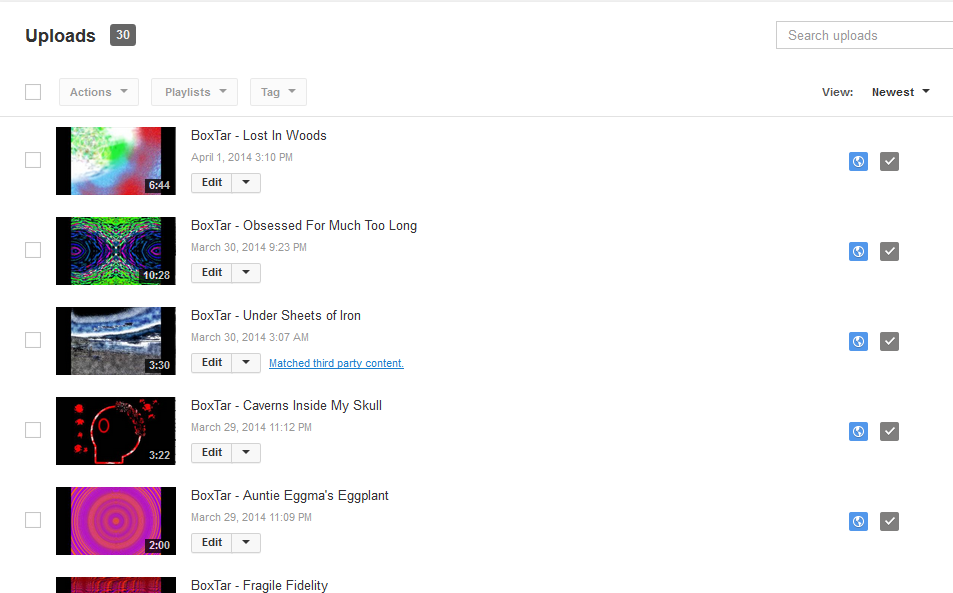 It had matched third party content. This was a song that I used no sort of sampling for, and it wasn't a cover. So I filed a dispute to their claim, thinking "oh, they just made a mistake, they'll fix it". And what do I get back? 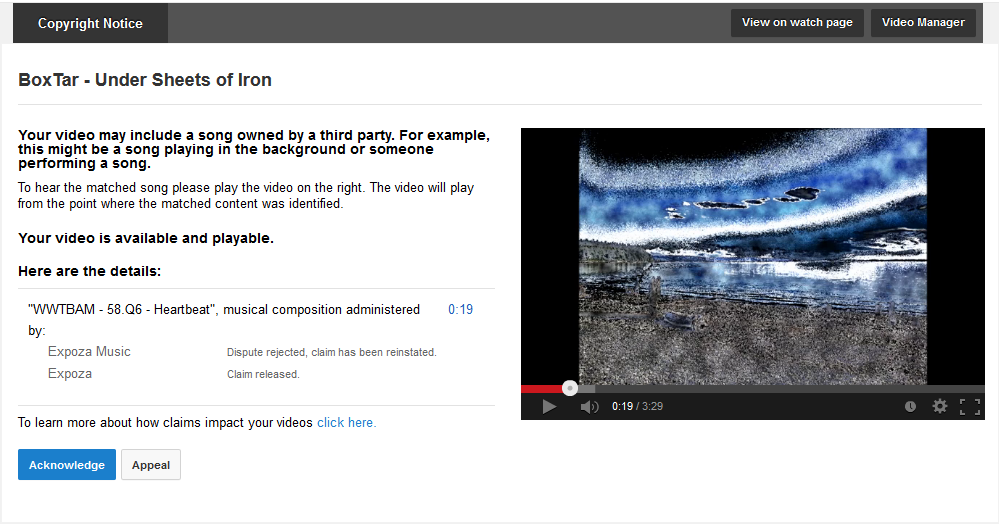 So, Exposa, the company, decided to drop the claim. But Exposa MUSIC decided to reinstate it. What. The. F*CK?! And do you guys know what song they think it is? A song from Who Wants to Be A Millionaire! Yeah, I'm not joking, that's what WWTBAM stands for. I wish I could show you guys the song they are referencing so I could give you a comparison, but they didn't even have the decency to let me know what the song even sounded like! No link, I try to look it up and find absolutely nothing.

And y'know, even if it did sound similar to that theme, I don't think that should even matter. This was still a piece of music I took a long time making, put my heart into it to sound really cool and original. And for what? For someone else to come and say "HEY! You're just ripping off X".

The song is playable and isn't going to be removed. So why should I care. I'm not making money off of it. Seriously, why is this such a big deal to me?

I'll tell you why:

YouTube is basically saying to me "Yeah, no, that isn't one of your songs, this is one of theirs. We'll be taking all the creative rights to that, thanks very much." That's just what it feels like. Say my channel did get big someday, say my songs did start catching on and I could start making money through my music. That video, and any others that YouTube arbitrarily saying are "rip-offs of other content", are going to be withheld from me. Period. I've disputed them, and now I fear for my channel because they are standing their ground on this baseless accusation and can give me a strike if I tried fighting back. Its ridiculous, disheartening, and incredibly frustrating.

I understand that YouTube isn't the best place to put music up. But my small issue is the hint of a much bigger issue: YouTube's Copyright ID system is STILL completely broken, and it doesn't even look like they are putting any effort into fixing it. This could hinder YT greatly, and limit SO much content, making YouTube fundamentally fall apart.

I wanna hear everyone's thoughts on this: What can be done to fix this? Have YOU been effected by YouTube's Copyright ID law; whether it be your channel, a friend's channel or a channel you used to love but got taken down? What would you do differently to help remedy this mess? Discuss...
Last edited: Apr 1, 2014

I know. Not from experience cause I could never make music. But I do understand the frustration, because some of my favourite YouTubers can't even sing during their Let's Plays. It is crazy. They really need to fix the system. And it baffles me a bit too. PewDiePie uses music all the time. I don't know if there are biases, but do his videos ever get flagged at all? Or is he allowed to slip through the ranks. Cause if it's the second one then that explains why RoosterTeeth and Achievement Hunter haven't complained much. Sorry this happens to you though N_M.

I unfortunately don't know how that feels. I suggest you switch to SoundCloud exclusively, though. I've found some great musicians from there - Wye Oak, Shaz Krew, FreeWind Castle. This is just my input, but I seldom do "Adventuring" so to speak on YouTube, whereas I do on SoundCloud. It's a much better medium for this type of a thing. And there are less issues like this on there.

With that being said, I do actually like your music. I think you'd do good trying some melodicstep as well. I subscribed to your channel as well, but that's just a suggestion.

It's quite depressing to witness YouTube's constituency fall prey to it's own content id system. The system certainly needs some kinks sorting out, coupled with the banal nature of copyright there's no telling how soon that may be.

I reccomend soundcloud, it's a good mediam.(keith beat me to it)

Keith said:
I unfortunately don't know how that feels. I suggest you switch to SoundCloud exclusively, though. I've found some great musicians from there - Wye Oak, Shaz Krew, FreeWind Castle. This is just my input, but I seldom do "Adventuring" so to speak on YouTube, whereas I do on SoundCloud. It's a much better medium for this type of a thing. And there are less issues like this on there.

With that being said, I do actually like your music. I think you'd do good trying some melodicstep as well. I subscribed to your channel as well, but that's just a suggestion.
Click to expand...

I actually do have a SoundCloud page. Had one long before I ever even thought of putting them on YouTube. The thing about SoundCloud is that they limit how much you can put up unless you pay for a premium membership. I only have around 60 minutes to work with, which may sound like a lot, but when you make songs that border on 10 minutes (my more ambeitn work) It tends to fill very fast. I hated deleting some of the songs on it, and felt that YouTube's infinite storage space would suit my needs a lot better. Now I deal with this. Trying to figure out what the lesser of two evils is...

And I appreciate the kind words as well, Keith.
A

Not sure how long this site will last, but if you want to just share what you create I use something called Audiour. Basically you drag and drop the track, and after it uploads you get a link that you can share.

Yeah YouTube is making some changes people don't really appreciate. I can't tell you how it feels because I only use it to listen and hardly do anything on it with my own account. But it sure is frustrating. YouTube should stop with these changes all the time or everybody might leave
You must log in or register to reply here.