General Zelda Which Zelda Character is the Cutest

Location
Somewhere in the known universe

The title should explain the whole purpose of the thread. I've seen a few threads about specific games but what about the whole series? I personally think Aryll from the WW is the cutest. Her reunion with Link at the Forsaken Fortress was adorable.

BUT first place is a tie between MM Romani and SS Kukiel. Both are adorable. I love how airy and fun Romani seems to be. She seems so cute and innocent and its cute that she wants to help fend off Them like some noble warrior. It's heart wrenching if it doesn't work out for her though

And Kukiel is just a cute little girl. And I love how she's not afraid of Batreaux
Y

Location
The world of anime.

Hmm.... I'd have to say Agitha from Twilight Princess. She's so adorable and anime-like. She also reminds me a lot of Rima, from Vampire Knight (an anime, for those who don't know), and I like Rima so that kind of settles what I think of Agitha. Aside from appearance, I'd also say her personality is very cute.

And because I really do think this, despite my hatred for Ilia, I think she's pretty cute. EXCEPT FOR THE FACT THAT HER PERSONALITY REEKS OF THE DEVIL. (ugh).

So anyway, both of them come from Twilight Princess - probably because I like more realistic-looking cuteness, rather than chibi cute. (although don't get me wrong, chibi is pretty awesome).

Also, on a side-note: How come I still can't thumbs up comments??? 20 people would've have notifications in their inbox by now if I was capable.

I think Oot Zelda's pretty cute. I mentioned a little while ago in the thread about how one of my favorite quotes from the series was from Oot Zelda when she says "C'mon... don't be a blabbermouth." when you say you won't keep what she's about to tell you a secret. She's just so innocent, yet so determined. Adorable, in my opinion. Also, in the final battle, she cries out every time Link gets hit. Some people probably find this irritating, but I thinks it's sweet that she's concerned, even if she expresses it in a rather high-pitched manner.

Also, Romani from Majora's Mask is pretty cute. Just the way she talks in third person is so adorable to me, for some reason.

Also, I may be alone with this, but I think SS Link is kinda cute too. His expressions and the way he reacts to everything around him is so cute to me.

Darkest of all Dark Links

I'm gonna go with Kukiel. She's just the most adorable little thing ever.

Aryll may be a close second.

i really gotta go w/ medli on this

I thought Marin:marin: was really cute. Her art style in the photo album was adorable. And the little sort of romance she had with Link was really cute, too. The scene where
Link rescues Marin on the bridge had me bouncing in my seat going "OH MY GOD, HERE IT COMES *squeal*!" (and then Tarin showed up and obliterated the entire freaking moment

)
She's so innocent, too. When she called me "THEIF" after I stole the bow from the item shop (because I don't have time to essentially fill my entire wallet), I think I actually felt part of my soul die.

I'd run with Medli myself; she seems moe to me.
T

Skyward Sword Zelda. She's got looks, and her personality is almost too adorable to handle.

Link's little sister. It's just so cute. I mean every one had to think she was cute. She was much more relatable as a little sister in trouble than as a princess It's only a shame we didn't see more of her.

Aryll. She reminds me of my sister. In so many ways. That relationship in WW is just like my real life relationship and I love it. Adorable.
Otherwise I would say the Witch in ALTTP - yes, her. She's all by herself in the woods making delicious stews! She might not be cute herself physically but she's adorableeeee! Poor lonely old woman who helps all life and is surrounded by evil goons...I wish you the best in the poor economy.

Malon from Oracle of Seasons. She may only be a sprite in the game, though the official artwork of her is pretty cute. 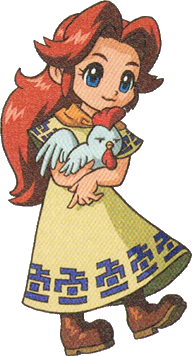 Definately Makar from WW, he's adorable when he makes noises and stuff, but Malon and Romani are too.
You must log in or register to reply here.