I think you're right there Y2K3,

nintendo definitely has an odd sense in humour sometimes.
G

im new here and this is my first post... so anyways my wierdest character is also my favorite. Its guru-guru.

My vote goes for ??? for being bizarre. Tingle, okay a 35 year old man who thinks he's a fairy. That's strange, but not unheard of. ??? however, is a hand that pops out of a toilet. How often do you see someone stuck in a toilet?
M

I think the creepiest people are the postman from twilight princess, The happy mask salesman, and tingle.
The postman is everywhere in twilight princess, crouched behind extremely random things.
The Happy Mask Salesman is.... well.... he is bipolar.. severely!
And Tingle pretty much is a 25 year old man dressed up in tight green tights with a pointy head and obsesses over fairies.
F

Well, Zelda is a fictional fantasy series, so it seems like there are quite a few odd characters in the series that we don't usually see in real life. I don't think I really have one character I feel is the strangest for sure, but I do have a list of some of the more... unique and eccentric... characters.

Tingle: I know he's been mentioned many times already. Tingle is a 35 year old man who pretends to be a fairy. Now, I'm not one to judge, but admittedly, that comes off as a bit strange to most of us.

Guru-Guru (OoT): This man stays inside the Windmill all day long playing his little music box. Have you ever wondered what he does when he's alone? The same thing he does when you're in there, I would assume. Just sit there and watch the windmill turn. That behavior seems a bit odd, too. I would never be able to stay in the same place doing the same thing for so long!

King of Red Lions (TWW and spoilers): You might not have seen this one coming. But he's a man that turns into... a boat. Why a boat? How did he gain the ability to change into a boat? Why not something else?

The Butler Door (TWW): If you've been to the Cabana in TWW, you would have seen the door that looks like a butler and talks to you. I mean, this door is alive! I often wonder how exactly that happened...

Hena (TP): The girl from the Fishing Hole. She comes on to Link so many times! Even though you actually do see things like that in real life, that doesn't make it any less odd.

Charlo (TP): The man dressed in green that you donate rupees to in order to gain a heart piece. Something about him always came off as odd to me. You give him a thousand or so rupees, and a heart piece magically drops from the sky?! Did he make that happen? How could he have done that?

Princess Agitha (TP): One of my personal favorites. She's about 10 years old (according to the Prima guide), yet she has a very... interesting collection of Golden Bugs. In addition to her incredible passion for the Bugs, she also has some very interesting things to say about her creatures!


"Li'l stag beetle, li'l stag beetle, your spiky pinchers are so sharp! They must feel so good..."
I think all these characters are strange in their own ways, but I'd have to say, Agitha takes the title for me!

Princess Agitha is a weird one, indeed, some of her quotes are just...disturbing.

The great fairies (for their moldy skin), Tingle (for his strangeness, herp derp), and ??? for his minor appearance in the game.

This is a pretty unsofisticated list, but I think most of you will agree that these fit in the "strange character" category.

Erm, Mune? The great fairies don't have moldy skin, those vines are just what they wear, not their actual skin, that would be Horrific, well, MORE horrific.

Conor said:
Erm, Mune? The great fairies don't have moldy skin, those vines are just what they wear, not their actual skin, that would be Horrific, well, MORE horrific.
Click to expand...

I like to think of it as moldy skin. I bet you could like scratch it off and eat the crisps. Actually no, that would be awful. Yikes, I wish I didn't say that.
R

Yeah dudes, I'm pretty sure that's mouldy skin. Personally, I have not tasted it. But if I would -- Then I'm sure it would taste horrific.
N

LnktheWolf said:
Has anyone else thought that guru-guru and the happy mask salesman could be related, because they act the same and look similar in both games
Click to expand...

YES! my thoughts exactly, darling, I have thought so as well. also, when either of them happen to be frustrated, their face *shudder* is the same angerish-teeth showing-ugly face!!
the face frightens me...

I've never really minded tingle, he is strange but i dont see him as creepy.

Strangest characters for me though;

Besides Tingle, I find ??? to be quite strange. 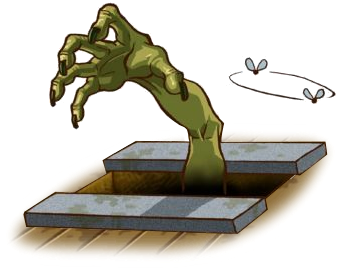