I like the green, since green is my favorite color.

And the border is kool.

The lettering, however you did it, looks good.

Im not a fan of Pokemon much, especially not Lucario, but it is still good.

Euch, I need to get into GFX more. Photoshop is on the Desktop computer and that's one slow-*** piece of equipment. =P

I think you need to start blending your images more, instead of doing effects of the same colour, making them deliberate stand-off's or sticking an overlay down. =P

Try and do some effects on a canvas, place your render, and then work on a layer which is ABOVE your render. Do effects around the edge of the render; if you Apply Image > Merged and then stick this on overlay, it will give you image much more dynamic colours which you may like.

That's why all my images are extremes e.g. very dark and grunge or very light and wavy

I like what you where going for in that avatar though, making it seem like movement Im guessing? Thats very nice, I like it. Try pasting two renders in the same place next time, lower the opacity of the top one to 50% and move it a slight to the left/right. That should give good movement physics.

Then, break out a softbrush on about 20% and slowly brush away the very edges of this lower opacity render, then using the two renders as one and blend into the banner. Stay away from any layer effects though

I may as well post one of my latest ones:

It is probably my most recent, despite it still being quite old. It's Firion from Final Fantasy. =D He looks cool in Dissidia and very like Link from Brawl e.g. Versatile. He has a sword, lance, bow, can use magic.

I'll admit that the top left corner could have done with more work, but comments would be welcome

I have recently been teaching myself the wonders of the path tool in GIMP. It's very helpful for cutting out individual people from full pictures and for creating abstract shapes.

Here is a picture of Sasuke from Naruto that I created only with the path and pencil tools:

I am a bit dissapointed in the way it turned out; I made his face way too long and not wide enough. I should have used the burn tool to make it look more realistic but I had already spent 3 hours making it. What a total waste of my afternoon. :xd:

EDIT: The white outline wasn't there in GIMP. I guess it just showed up on this dark background.

I'm a beginner at making signatures, but I just recently got the GIMP program and I decided to mess around with it and see what I could make.

Here's the four signatures that I have made so far with the program:

The third one I think should have a darker green background and the last one is the one that I'm currently using. So what do you guys think?

Location
on a crumbling throne 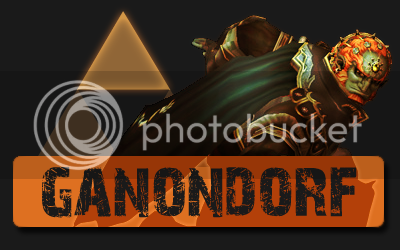 Here's some of my better banners that I made using GIMP.

A banner of Majora's Mask.

A banner of Master Hand and Crazy Hand from Super Smash Bros. Brawl.

A banner of Bowser.

Inside joke about Jigglypuff.

One of my cartoon characters in a banner.

The complete gallery of my works can be found here.

Those have to be the best gimp banners that I've ever seen! :clap:

My favorite has to be the Majora's mask one. It seem flawless to me.

Yes, your Majora's Mask one is very impressive. And Zeruda, I think your simple set is better than any that I've ever done

. Here's one I did, thanks to Caleb for providing me with the pic. I just brought out the color and threw my name on it, nothing too special, but I think it looks cool.

It very much does look cool.
I don't draw much, but I do when I want to make something for a video and whatnot. This is something that has appeared in the Link's Awakening ones I've made.

The guy who plays Link though is incredibly good at art. This is something he made (I put in the text):

It took me forever to make this.

The graphics might not be good, but i drew the picture from scratch. it took me a couple hours.

^That's not bad considering you did it from scratch, KrazyKyuubi. The difference in Link and Sasuke's expressions amuses me. =P

Thought I'd make a sig today, and came up with this:

I wasn't able to make it into anything good, but I got a lot out of it, I suppose. I haven't been able to find anymore good tutorials, so I learn more about the program by making crappy sigs. =P

Hylian Hobbit said:
^That's not bad considering you did it from scratch, KrazyKyuubi. The difference in Link and Sasuke's expressions amuses me. =P

Thought I'd make a sig today, and came up with this:

I wasn't able to make it into anything good, but I got a lot out of it, I suppose. I haven't been able to find anymore good tutorials, so I learn more about the program by making crappy sigs. =P
Click to expand...

I like the sig you made, a lot better than anything i could ever do.
S

I made the background meself! *proud look*

I be a Kokiri~

Location
In a city along the Great Bay coast

For that one, you can see my steps. Somewhat out of order, but you get the idea. Click

^ I drew the render myself on this one ^ Very proud of these sigs. x3
You must log in or register to reply here.