For those of you that haven't heard of a Virtual Boy before it is a table top 3D capible video game console that Nintendo released in Japan and North America in 1995. It was considered a commercial failure and sold less than 800,000 units and only 22 games were released worldwide, due to lack of sales it was never released in PAL regions. Many people have problems when playing the console such as motion sickness and neck strain, this was a large part of the reason it did not succeed.
Image Below: 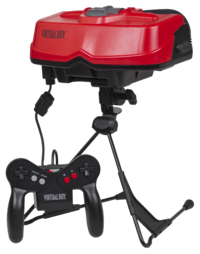 Have you ever heard of the Virtual Boy before?
I have seen it around the internet a few times before.
What do you think of the Virtual Boy?
I think that it is interesting to see that Nintendo has tried with 3D before the 3DS and I think it was a bold move to try it again even after the failure of the Virtual Boy. While I'd only play it in short sessions I think it would be cool to own one as a colectors item.
Have you ever had the chance to play one, prehaps you even own one?
Yesterday I tried one for the first time at a gaming meet up. I thought it was alright and after 30 minutes of playing I did notice slight eye strain but nothing too serious. Most of the games that I played seemed to be like arcade style games so I didn't see anything with much of a storyline.
This is me plating the Virtual Boy:

Have you ever heard of the Virtual Boy before?
Yes, numerous times. Mostly over the internet, but once even in the Official Australian Nintendo magazine. It dedicated several pages to how much it sucked.

What do you think of the Virtual Boy?
I think it failed for a reason. Asides from the terrible design of the actual console, the world wasn't ready for virtual reality games. I don't think this can even be said today. As I've seen, most of the games in the library were at least decent, but hardly any scream "virtual reality". 3D doesn't make me feel like I'm in the game, which is what the purpose of virtual reality is. It needed more first-person games.

Have you ever had the chance to play one, perhaps you even own one?
Nope, and I'm not gonna try.
Last edited: Jan 6, 2013

Have you ever heard of the Virtual Boy before?
I first heard of it when watching a ScrewAttack.com video. Then again when I started watching the Angry Video Game Nerd.

What do you think of the Virtual Boy?
I think that I want one to help continue my Nintendo console collection.

Have you ever had the chance to play one, prehaps you even own one?
I've had the chance to get one numerous times, but I passed it up for something that I would actually want to play. Perhaps I'll get one when I start working.

I said "First Person", not "First-Person Shooter" -.- Anyway, almost every game looks terrible on the virtual boy in monochrome, why isolate this genre alone? Teleroboxer looks no worse than a good Gameboy title, and might I ask what perspective it's in? Red Alarm has the option for a first person shot, too. It needed more games like these to make the player feel like they're inside the game, the entire concept of virtual reality. And I don't know what you're saying about the N64 because the Super Nintendo can do just fine.

Yes I've heard of the Virtual Boy... quite a bit!

It was a commercial failure because of it's awkward controls/positioning, lack of portability (for something not advertised as a "home console"), and the graphics were just bad... there's not much more headache-inducing than a moving, 3D, black and red-colored video game.

I haven't played one, though I would like to for the experience. I've thought about buying a Virtual Boy, but it really doesn't have much long-lasting value aside from being a collector's item.

He gave me LOADED DICE!

Heard of it a bunch!

It looked pretty cool, but when I saw a AVGN video review on it, the only game that seemed appealing to me on it is the Robot Punchout, WarioLand and Vertical Force. Also, if they said it was portable, they were deathly wrong.

I don't own one. Good part? No headaches and eyestrain. Bad part? Never will get to play the 3 games I'd like to play.

I've never had a headache so bad than after playing this thing.

Yup, I have definitely heard of it.

I think that it was an attempt at something new that unfortunately turned out to be a failure for Nintendo.

I probably won't ever play one, but I might just go out and try to buy one someday because of how rare they are.

I remember reading a lot about the Virtual Boy in gaming magazines back in the day, before it was released.
There was one at the local Blockbuster where I would go play the Wario game and the Tennis game. It was fun, but over priced and didn't have enough games. I always thought the controller was strange. But it was definitely unique and something really different, especially for its time.

I would love to own one these days since it's the only Nintendo console I never bought.

Yes, I've heard of it. I would love to get my hands on one. I've never had the opportunity to play on one, so I think it would be an interesting experience.

It doesn't matter if the SNES can't do it "well" by your definition, but the fact is that it runs Doom and it's pretty damn good. Comparing it to the PC is irrelevant. You're basically stating that for a console to do a FPS, it has to be greater than its competition.

Regardless, I feel the need to point out again that I said "First Person" and not "First Person Shooter". How easy would it have been to make Mario Tennis in this perspective instead of over-the-shoulder?

Yes I heard of it. I have one. It's not with me now, it's in storage at my parents' house. I've had ever since it first came out. I got it a couple weeks after its release. The Wario game is excellent actually. And I never had the headache problems from it other people complained about. I personally think the system was very underrated. The only serious flaw it had was lack of an included AC adapter and the low battery life. Contrary to certain claims, I can guarantee you that, while it does have a port for an AC adapter, it does not come with the system. It was sold separately. It is powered by four AA batteries inserted into the controller. And that would get you about four to six hours of play time. So that was a bit of an issue. That combined with the awkward shape, meant it really wasn't portable.

My parents bought me 1 when they first came out and to this day i feel sorry for them wasting their money on that cause a year later they was buying me a gameboy pocket for my bday lol I still have my VB and to this day i've never had headaches due to it and tbh i should sell it cause they go for a pretty good price on ebay nowadays and i have 6 games with mine as well.


Bowling,Wario Land and the Mario games were not that bad at all and heck as a kid i loved all them no matter how bad they sucked awww the memorys

Think of it: Interesting idea but crappy execution.

Want to play it: Maybe if I find one, I wouldn't go out of my way to find it.
You must log in or register to reply here.