I've always enjoyed the Gameplay better myself. Sure the graphics can make it look more appealing, but look at how the games were back in the day. The graphics were terrible by todays standards and yet people absolutely loved them because of the Gameplay. If it wasn't for that, games would not be where they are today and definitely graphics wouldn't it make a difference.

Talking about graphics is pointless.
Visually, art style matters so much more than how the game was optimized for the console.
I mean, does anyone really care about how realistic a game looks?

Regardless of how bad the graphics are, the gameplay is all that matters.
For example:
Twilight Princess has been said to have bad graphics due to it's semi-realistic style.
But the gameplay was fantastic.
As long as you can see what you're doing, decipher the characters, and understand the story/plot, you're in good shape.

(or the game is anyways, lol)

A combination of both. They kinda compliment each other. Gameplay without graphics = wonderful game, but ugly at the same time. Graphics without gameplay = Beautiful game, but unplayable. I wish there was an option for "Both" on this poll.

If a game has wonderful graphics yet terrible gameplay, it's only going to be aesthetically pleasing, but nothing else. I mean, how am I meant to enjoy wonderful scenery and storyline if I can't get around the gameplay mechanics? :O

There definitely has to be a solid balance struck. Leaning too much on one side is going to send the whole game off the rails! I think many developers spend too much time focusing on one element opposed to the other and that's why many games lose appeal to the wider audience and thus fail sales wise. Most of the time it's too much focus on graphics, but that's just a general observation.

Graphics mean almost nothing if gameplay is lousy

Game play is the biggest part for me. Graphics are still important but game play is the best. Would you rather play a game with great graphics or a game with great game with bad graphics and amazing game play. I think the answer is clear. Think about the Nes and the old Legend of Zelda games. They had bad graphics,(no offense) but they were so fun. While some games have great graphics but are not very fun. Do you see what I mean. Game play means a lot more than graphics.

I've said this elsewhere--gaming is a visual medium. So is film. Plot is often, but not always, central to film, but visuals are important. A similar thing can be said of a video game.

Of course gameplay is important and absolutely central. But visuals (not necessarily graphics) are important too, and can be an integral part of the gameplay. Consider Riven:

How could anyone, after playing this game or even seeing these clips, say "graphics don't matter?" The visuals are integral to the experience, and, indeed, are so seamlessly incorporated into the gameplay that the two are inseparable. Riven is a visceral experience, and if you take away the visuals, you take away almost all of that experience.

As such, I'm not voting in the poll. The two are not set against each other, and neither is necessarily less relevant.

People who think Graphics are better than the gameplay is not a gamer. How could you put graphical design before the actual gameplay elements? Great graphics are nice to have, but not necessary for a good game. 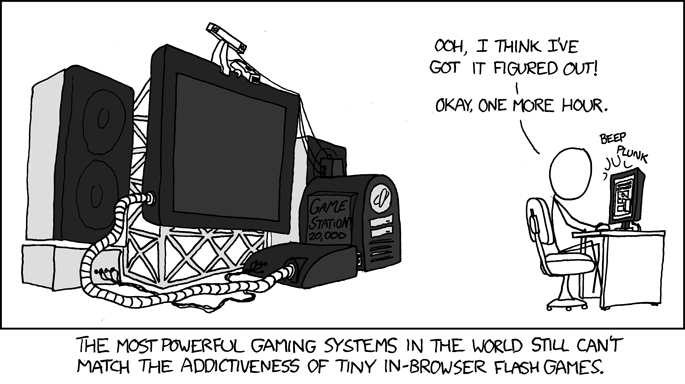 I believe this picture said my thousand words.
J

Gameplay of course! However this doesnt mean graphics dont matter at all. You are looking at it and obviously you want to enjoy what you are looking at. I also kind of have a issue on what people consider good graphics, it always seems to translate to "Graphics" = "How realistic". I personally do not think of it this way, for example i really enjoyed the art style of windwaker, and the more recent game in developement "Ni No Kuni" art style looks absolutly beautiful and i am very much looking forward to that one.

Gameplay is the most important thing in gaming, with story following behind it, then soundtrack, and finally graphics. Sometimes I even prefer older graphics compared to graphics today, because they had more color and creativity. That might be just me, but it's how I feel about them.

Without a doubt, gameplay is the most important to me. To me the quality of the game itself matters more than just how the game looks.
You must log in or register to reply here.