Djinn said:
New Jersey is nothing but artificial at this point. It's a gigantic island of concrete and steel rebar covering 50+ year old landfill with a light coating of graffiti. I'm still wondering how they ever got the title Garden State.
Click to expand...

I didn't know it was that bad. But yeah, no idea how they got that nickname. I've driven by many times, and not once did I see a single garden. Or tree.

I like to crack jokes about New Jersey as much as anyone but there are plenty of pretty green parts of Jersey, especially South Jersey

Seth...you live in and respect Florida. Your opinion about nice states is meaningless. Canadian Edgar Nernberg isn't into the whole evolution thing. In fact, he's on the board of directors of Big Valley’s Creation Science Museum, a place meant to rival local scientific institutions. Adhering to the most extreme form of religious creationism, the exhibits "prove" that theEarth is only around 6,000 years old, and that humans and dinosaurs co-existed.

¯\_(ツ)_/¯
Local outlets report that the man is far from shaken by the bony fish, which he found while excavating a basement in Calgary.

Because here's the thing: He just doesn't believe they're that old. And he's quite the fossil lover.

“No, it hasn’t changed my mind. We all have the same evidence, and it’s just a matter of how you interpret it,” Nernberg told theCalgary Sun. “There’s no dates stamped on these things."

No sir, no dates. Just, you know, isotopic dating, basic geology, really shoddy stuff like that. To be fair, I'm not any more capable of figuring out when a particular fossil is from than Nernberg is. I'd be one sorry paleontologist, given the opportunity. I've never even found a fossil, so he's got me there. But the science of dating fossils is not shaky -- at least not on the order of tens of millions of years of error -- so this fossil and the rocks around it really do give new earth creationism the boot.

But this can go down as one of the best examples ever of why it's downright impossible to convince someone who's "opposed" to evolution that it's a basic fact: If you think the very tenets of science are misguided, pretty much any evidence presented to you can be written off as fabricated or misinterpreted.

Even if you dig that evidence up with your own hands.

The scientific community is thrilled and grateful for the find, and the University of Calgary will unveil the five fossils on Thursday. These fish lived in a time just after the dinosaurs were wiped out, when other species were able to thrive in the giants' absence. It's an important point in Earth's evolutionary history, becausenew species were popping up all overto make up for the ecological niches dinos left behind. Creatures from this era give us some breathtaking glimpses of evolution in progress. But it's rare to find fossils of that age in Calgary, since most of the rocks are too old and yield dinosaurs instead.

Ironically, Nernberg's contributions at the Creation Science Museum are almost certainly what scientists have to thank for the find. He's an amateur fossil collector, and he knew the fish were special as soon as he spotted them.

"When the five fish fossils presented themselves to me in the excavator bucket, the first thing I said was you’re coming home with me, the second thing was I better call a paleontologist,"Nernberg said in a statement.

“Most people would have overlooked these. When these were uncovered, Edgar right away recognized them,”Darla Zelenitsky, paleontologist and assistant professor of geoscience at the University of Calgary, told the Sun. "He’s apparently interested in fossils, and that’s probably how he saw them. An ordinary person might have just seen blobs in the rock.”

Nernberg is reportedly seeking a cast of one of the fish so he can put it on display at the creationist museum. 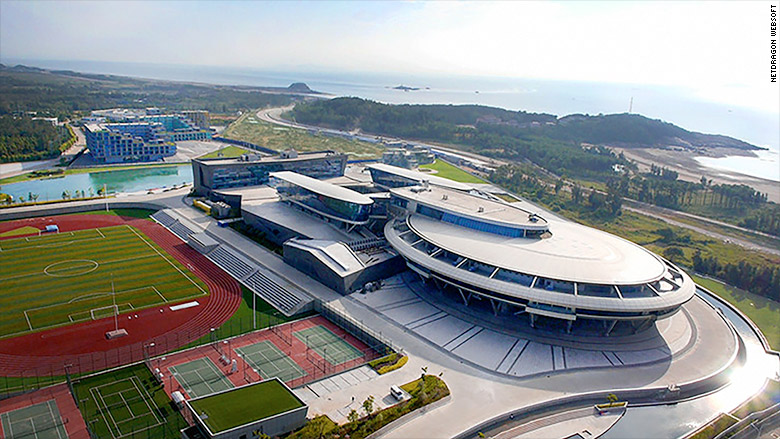 If you long to work on the Starship Enterprise, send your resume to NetDragon Websoft.
The online game developer run by an avid "Star Trek" fan has built its headquarters in China in the shape of the legendary spaceship that Captain Kirk used to "boldly go where no man has gone before."

NetDragon was founded by Liu Dejian, one of China's most wealthy men and a self-described Trekkie, according to various Chinese and American news reports.

The six-story building in China's southeast Fujian province is about 850 feet long and 300 feet wide. The company reportedly spent nearly $100 million to build it, and construction was completed in October.

Related: China gets a new billionaire every week

NetDragon executives reportedly asked CBS, which produces Star Trek, for permission to build their terrestrial version of the Enterprise.

"That was their first time dealing with [an] issue like this and at first they thought that it was a joke," the company told the Wall Street Journal. "They realized somebody in China actually did want to work out a building modeled on the USS Enterprise only after we sent the relevant legal documents."

As if the Star Trek theme weren't unusual enough, the building also features a life-size replica of a Tyrannosaurus rex skeleton.
Click to expand...

They just need all their tech guys and interns to wear red uniforms.

literally no one is surprised
R

I don't think we need statistics to show there's a problem with the content or the viewers of fox news (that is if your watching fox news to get actual news). You could simply look at the content and probably deduce the same conclusion.

Fox News is the worst when it comes to this, but network news in general is shameful. I can't even watch it.

Well I mean it does have a bad history, but I don't think it should be stripped entirely from history. It should still exhist to remind us of the past and that at one time America was in the midst of a schism.

Well I mean it does have a bad history, but I don't think it should be stripped entirely from history. It should still exhist to remind us of the past and that at one time America was in the midst of a schism.
Click to expand...

Taking the flag down isn't stripping it from history. We absolutely shouldn't forget it, but we don't have to fly it over a freaking state capitol to do that.

Azure Sage said:
Taking the flag down isn't stripping it from history. We absolutely shouldn't forget it, but we don't have to fly it over a freaking state capitol to do that.
Click to expand...

No you are right, my point is a lot of people are telling me they think the flag should be stripped from history which I think is stupid, if we forget about it it might happen again. Sure it might not be pleasant learning about war, and slavery (although the civil war wasn't started because of slavery) but it happened, we should learn about it.

(although the civil war wasn't started because of slavery)
Click to expand...

Yes, it absolutely was. There are multitudes of articles devoted specifically to this subject. The secession documents of the states of the Confederacy are incredibly clear on this matter.

Do not buy into the revisionist notion that it's about "state's rights." It's a lie perpetuated by white America in a misguided spirit of solidarity to welcome the defector states back into the Union during Reconstruction.

Yet another situation that seems more like a comedy sketch but sadly is real life. ISIS is now recruiting with the crazy cool language kids use these days.

It just seems a bit more like a jihad version of

...If only someone would shop this some...