So Ghirahim was obviously some kind of Anti-Fi, so is there an anti-master sword?
And if Demise's black sword was it, why haven't we seen an anti-master sword any other time.
Just bringing up something that ws problobly already brought up, but i didnt see it anywhere on here so yeah....

But, to answer your questions in particular:
So Ghirahim was obviously some kind of Anti-Fi, so is there an anti-master sword?
I am not sure. I've read Hyrule Historia scanlations but I do not know for any such "anti master sword" to be canon. Sorry I can be of no help there!

why haven't we seen an anti-master sword any other time.
There has to be a start for everything somewhere, and SS being an origin story, if the Anti-Master Sword is real well, what's a better place to feature it except SS? xD

I'm baack. Who missed me?

If you look closely at Demise's sword, it does resemble a form of anti-master sword. You can see this in the hilt design and the same Triforce crest on the blade. As for why it doesn't show up again it would most likely be because after you beat him, he makes the sword disappear and nobody else can use it. I have heard theories about how the Trident of Power could also be Demise's sword in a different form.
O

So Ghirahim was obviously some kind of Anti-Fi, so is there an anti-master sword?
Click to expand...

My personal interpretation is that Demise's sword isn't exactly an "anti-Master Sword" but basically the dark opposite to Link's sword; in the sense that Ghirahim was the opposite of Fi. So, I guess I wouldn't call it the anti Master Sword..

When Ghirahim shows his true self as Demise's sword, there is no indication of it being the anti Master Sword; it's simply Ghirahims sole purpose, as he is Demise's dark weapon.
Last edited: Sep 23, 2012

Is he Dark Link's sword?

They're pretty alike. I guess your anti theory could be correct.

They're both weapons, weapons of the paragon of evil and the paragon of good. In that sense they're related. Character-wise, Ghirahim is a manical demon and Fi is a robot, so they're not related in that sense.

I agree with what SNOlink says, Demise's Sword probably actually does make a reappearance in a different form as the Trident of Power, the trident Ganon used in A Link to the Past, the linked ending in the Oracle series, and Four Swords Adventures. But if this is truly the case, they should have done a better job explaining the connection to us.

While I would never say that they are like the yin and yang of each other, but it is possible that they are of similar creation. I would imagine that both were created by the Goddess, but, like some of the other creations, his ill will upon the other beings led him astray and into the hands of Demise.

I have a similar train of thought concerning this sort of situation as I do the Guardians of the Silent Realm. By this, I mean that the species of Fi and Ghirahim were also involved in the war between Hylia and Demise - be it on Hylia's side, or Demise's. It's very possible that Fi was the only one on Hylia's side, or Ghirahim being the sole being of his people on Demise's side.

This would imply that the other members of this race died during the war. Ghirahim - Demise's trusty sword - and Fi - Hylia's prophet - were the sole survivors of a race that was no doubt created to complement her soldiers. This race was created to be weapons, yet have personalities. Whether this could be in order to create a bond between the weapon and wielder, or for giving the wielder guidance, I can only assume. 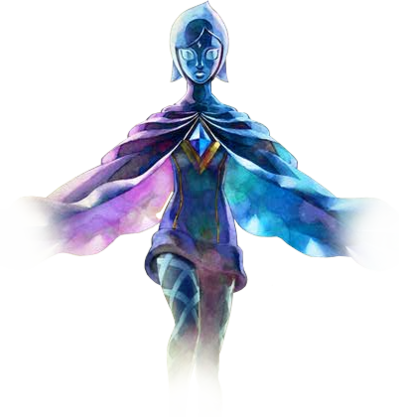 Naturally, the only member of this race on Demise's side - or the most powerful that was on the Demon Horde's side - would act as Demise's weapon. Although not seen as such until fought against Fi, Ghirahim later becomes the anti-Master Sword.

Like a few people before myself have said, it is quite possible that we've seen this "anti-Master Sword" already - the Trident of Power. I can only assume that these species reflect upon what the wielder desires. Link desired a pure weapon, and Fi accommodated to it. Demise wanted a dark, intimidating-looking weapon, and Ghirahim too adapted to his Master's wishes. It's quite possible that a trident was what Ganon felt suited him, so his weapon reflected upon what his Master wanted - much like the Triforce.

I think there's a lot of unspoken history between Fi and Ghirahim. Unfortunately, a lot of it will always be left to speculation, and we can never quite know for sure. It's interesting to imagine that the last surviving members of a race were forced to fight the other to the death. And yet, it's just as interesting as it is sad.
You must log in or register to reply here.