Just finished my fourth playthrough. Made a dex/arcane build powerstancing with two Hands of Malenia. It was great. I really like how easy it is to experiment with different builds in this game.
W

check this out and see if it doesn't sound familiar

A blind master of the sword from a time long before the Shattering. It's said he received a "flowing sword" from a blue fairy and used it to seal away an ancient god of Rot.

He's implied to have worn the Blue Cloth Set. At very least, the description of the Flowing Curved Sword indicates that he wore blue.

the fairy that helped him might be in (or is) the Siofra River (Siofra means fairy in Irish). 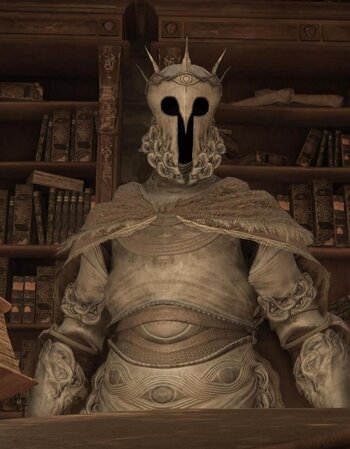 A legendary hero who seals away a great evil using a magic sword. Helped by a fairy. Wears blue like the champion's tunic. if it had been green it would have been even more of a call back to Ocarina of Time, but whatever. Rivers and springs and fountains involving fairies and peaceful gods is a trope in Zelda. Navi doesn't come from a spring or river that we know of but several spirts and definitely the great fairies do.
W

The Scarlet Rot is also obviously a lot like Malice.
You must log in or register to reply here.