Are There Any Game Enemies That You Respect?

I wrote an entry in my bolg a while ago, and it inspired me to make this thread. There are some enemies in video games that I respect quite a bit. For example, Darknuts from the Legend of Zelda series. There are many enemies in the series that I can defeat with little more than the flick of my wrist, but Darknuts are some of the only (if not THE only) non-boss enemies that truly prove a worthy foe. Whenever I fought them in Wind Waker, I would show my respect. No sneak attacks or projectiles; I would just walk right up and challenge them. After defeating one, I would take their sword and place it in the centre of the room (if there were two of them, I would arrange them into an "X" shape), then make Link bow in front of the sword(s) by pressing the crouch button.

So, do any of you have any enemies in a game that you respect more than others? If so, which ones and from what games? Do you do anything to show your respect?

Darkest of all Dark Links

...No...because...they're game NPCs. But I can sorta see what you mean with DarkNuts. Although in my case, it's with TP. I hated cheapening the battle with bomb arrows. As for Wind Waker, projectiles are pretty pointless...same with sneak attacks. But it doesn't matter. They're weak and posses little intelligence away.

an aim of a game to survive for me is to survive, if i come across anything that can kick my arse then I'm gonna do everything i can to get out of there alive which includes sneak attacks and spamming if i have to.

However, in a round about way i see what you mean. Outside of characterisation (in which case I'd say i respect WW Ganondorf) when i do come across a tough for i give it my all, i bring the fight to them as much as they bring it to me which i guess is a kind of respect, I understand that they can kill me so i need give them my full attention and be careful with them. Not sure if thats respecting them or their power though.

I definitely respect any and all players in the Resident Evil 5 Versus Mode. I try my hardest not to quick-turn, use OP loadouts, etc.

I also respect Vanitas from Kingdom Hearts Birth by Sleep; I don't spam Ignite to chip away at his health, Zero Graviga to stun him or anything like that. It's only me Cartwheeling (Aqua) or Dodge Rolling (Ven) to keep away from damage ^^

If there's one enemy in gaming that I respect more than any other, it has to be the Super Mutants from Fallout 3. Those guys can take a nuke to the face and walk away like it was nothing.

The Dahaka in Prince of Persia: Warrior Within. As if the difficulty of that game wasn't enough, a strong, undefeatable creature that chases you around at high speed appears at regular intervals throughout the game and if you're not quick enough (or too stupid like me) to figure out the free run puzzles...

the amount of hours I spent on the Dahaka chases is ridiculous.
I'm actually glad I got the bad ending and had to fight Kaileena on my first playthrough. The Dahaka would have wiped the floor with me :embarrassed:

May we meet again

Location
Going away for the fall semester to finish my engi

The Boss from Metal Gear Solid 3. She made the ultimate sacrifice, giving her life and the dignity of her name away in her service of her country.

Koopa Troopas bro, those guys are hardcore. Cliffs don't even intimidate them... Mario must have really pissed them off.

Like- I respect Bowser.... then again, I have this obsession with him, so maybe I'm just bias xD
(Boswer is my ALL-time favorite character of any video game to this day)

I also respect Ganon, and the Bulblin King.
Bulblin King especially, because he seems to show respect to Link, for his bravery/courage/ability to fight with great force/whatever at the and of the game.
And, I believe respect is a two-way street.

Though, even though he wouldn't show any, Ganon is very well able to be respected in his strength, and his cool beast form....
though, again, with Ganon, I might just be bias to his pig-beast form because I like it xD

I really like Meta Knight, everytime Kirby ends up fighting Meta Knight, he hands Kirby a sword for a fair duel, I think you gotta respect that.

I also really liked Ganondorf in wind waker, the other Ganondorfs are cowards always turning into Ganon or flying around trying to beat you in tennis, but in wind waker you're actually the one fighting unfairly, 2 vs 1, and what makes that even better is Zelda is not even required to beat him, so yea he finally fights fair and you cheat.

I'm sure there are more but none I can think of atm.

Oh gosh, I adore antagonists more than the protagonists half the time. My second favorite character in all of video games is an enemy. I'm going to focus on a single enemy. With that being said, I'll jump right in.

Shahkulu from Assassin's Creed: Revelations is the most respectable enemy I have ever encountered. He is what I consider to be a man very similar to Ezio in circumstance. He was an innocent child when his Anatolian village was burned to the ground, leaving him an orphan. He sought revenge against the Ottoman Turks, eventually joining the Templar ranks. This is similar to the story of Ezio, whose family was killed. Unlike Shahkulu, he found his place within the ranks of the Assassins. Had their circumstances been different, it might have been Shahkulu standing over Ezio's dead body.

Let's all be honest, Shahkulu was a bit crazy. This dude killed Turks for fun. When Manuel was like "Yo man, stop killing them. We're trying to torture them bro, chill out." He was like, "Ain't my fault that they're weak." Do you know how much gall that takes to say that to Manuel frickin' Palaiologos? The dude is an obese heir to a dead empire. He clearly is a little bit crazy himself.

Not to mention we never see Shahkulu's face. Do you know what could be behind that mask? For all we know, it was the skull of the Grim Reaper. Did you see him whip that Assassin? Achieving 100% synchronization during that mission is annoying because he's too damn strong with that whip. I would never ask him if he lifts, because I know the answer already. Unlike Schwarzenegger though, he bench presses the bodies of all the people he kills. He's too good for dumbbells.

I'd write more, but this is enough. Click spoiler for pictures.

Look at this. This dude is choking Ezio out. This dude was jumped on, stabbed, and is still alive. Do you think you could survive the same thing? Stop lying. Just stop it right now. This dude is clearly the embodiment of an Anatolian god. 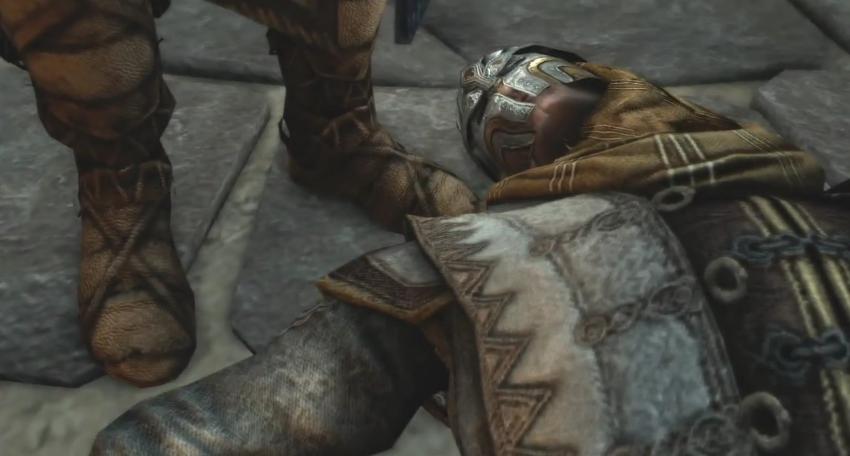 Do you know how many stabs it took for this to happen? He had more health than half of the Templars in the original Assassin's Creed. How much blood do you see? None, right? That's because he doesn't bleed. He's too good for blood.

Shahkulu is so hardcore that he doesn't stop being relevant after Assassin's Creed: Revelations. This dude travels through time and takes the Night Stalker, leaving the dude with legitimate swag. Seriously, how many other characters make two appearances in Assassin's Creed multiplayer? None, that's how many.

Of course.
You must log in or register to reply here.