Some fictional creations (like MGS's Raiden) as well as big businesses (like nintendo) get a hard time of things and are labelled as soemthing that they barely are, but then the stigma sticks and it can't be shaken free. Much like Raiden for not being as hardcore as Snake and looking like a woman, and much like Nintendo for being 'too kiddy' (despite the games being brutal on occasion like every Mario game i've played, Aquaman seems to be another of these characters who has done nothing wrong yet gets some quite critical stigma stapled to him, and its kind of sucky for him because he isn't 'too kiddy' or not as good as another character, he is just labelled wholesale as totally sucky.

Most people who complain about Aquaman probably haven't read anything featuring him and even less will have bothered to look into his solo outings outside of group work in the Justice League, but for those who have, do you think its right on the money to have Aquaman's label as being a wholly sucky character fit for being laughed in pop culture or is he a hidden gem amongst the big names that crowd the limelight? 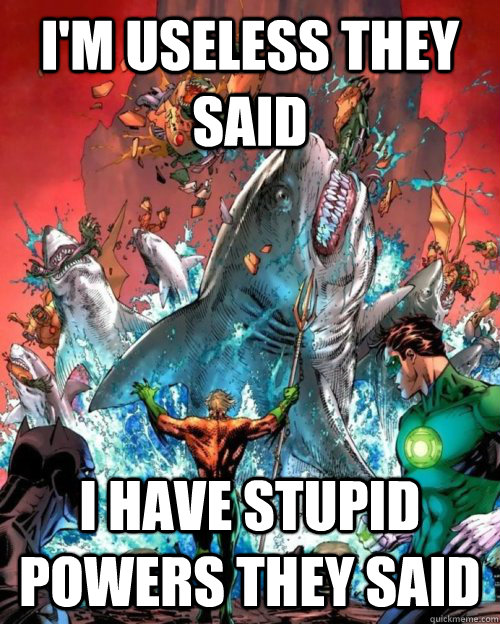 But otherwise ((drawing from what measly knowledge I have of superheroes, mind you)), I don't think he's quite as good as other characters. From what I know ((and I could be totally wrong)) he derives his power from water. Most of the universe is extremely lacking in liquid water. Of course, this isn't true on Earth, where most of its surface is water, but there are still plenty of places even on Earth where his uses would not be very many.

No Aquaman. Just, no.

Damn it, why do people always beat me to stuff like this?

Edit: Raiden singlehandedly took down an army of Metal Gear RAY's at the end of Metal Gear Solid 2 and is now the Cyborg Ninja that did things such as this and this. I think he's qualified of being called a badass.
Last edited: Mar 12, 2013
S

Well, Aquaman can summon Cthulhu if he wishes and he rules over 70% of the Earth. I think Aquaman can be awesome if the writers know how to use him properly.

[video=youtube;T837zAuUMLA]https://www.youtube.com/watch?v=T837zAuUMLA[/video]
You must log in or register to reply here.