Anybody Have Tumblr Accounts?

Yeah, I did say I wouldn't come back there again, but I decided to give Tumblr another shot. Does anybody else have a Tumblr account?

Here's mine if anybody's curious: http://bellpendant.tumblr.com/

Mine is in my sig. The hyperlink that says "My tumblr".
L

Dawn of a New Day

I have two, both a main one and a side one that I just created for fun, you can find links to them under the second banner in my sig's spoiler.
W

Yes, but I barely ever visit it, though. I actually have no clue as to why I made it, and I am still trying to figure out what Tumblr is. I guess I plan on using it at some point in the future, though, seeing as I coded a background for my profile and everything, but first I'll have to figure out what I'm going to do with it (keep it, delete it, etc.). 'Til then, I'll refrain from providing a link to my profile.

I have one, I mostly post and reblog Doctor Who things

Yes, I do. The link to my blog is underneath my signature graphic. For the most part, I reblog random stuff that comes up on my dashboard, but I also reblog stuff related to various anime and the Zelda series as well. I don't really do much else with it.
H

Just followed half of you. To let people know what I reblog, it's mostly random stuff. It's a multifandom blog.

Yes, yes I do. I use it to praise middle-aged actors/actresses for being 9999999999999 times hotter than me, and also to spread the creations of Satan, Santa, and Stana.

I sort of still don't get tumblr, so it's like a social networking website... but blogging too, well social sites all feature blogs, but erm... this is more for less real life social networking... Would it be fair to say Tumblr is like the ZD blog section only it's the entire website.
F

Yeah, I got a tumblr some time in October last year. I initially made the account for quizalfos (which is a self-made parody of philosoraptor, except with Zelda things and ZD inside jokes), but that was really short-lived and I kind of lost interest with tumblr pretty fast. More like, I had no clue on what I was supposed to do so I just stopped. Plus, it was really mean to Huey. I got on every so often, but didn't really do much. There was a small spike in my activity in March, but it died back down. Come June 2013, I would get on my mom's old laptop late at night (after my old midnight internet curfew on Huey would block the internet) tumbling and lurking in ZD's shoutbox and would stay up 'til I could hear my dad stirring upstairs (around 6 AM-ish) and then I would fake sleeping. My activity on tumblr kind of picked up over summer because of that, though.

I got even more into tumblr when I started really obsessing over playing with my blog theme. I switched themes a few times, but I finally reset it to the default (called "redux" if I recall) and began fiddling with the CSS to my liking. There are still things I intend to work on regarding my theme, but I haven't messed around with it much in the past few weeks. I've also been intending to fix the tags on my blog, but I've just been too lazy at the moment to even bother. I really want to organize some of my older posts so my blog's uniformity is all perfect and stuffs. But, I mostly post (and reblog stuffs) about The Legend of Zelda, Harvest Moon/Rune Factory, The Last Airbender/The Legend of Korra, a few other fandoms, a select few anime, and really ridiculous and stupid posts of my liking. So... yeah. I only have one blog, right now, but the link to it is in my signature.


Technetium said:
spread the creations of Satan, Santa, and Stana.
Click to expand...

That was perfect. Oh my god, Technetium. How--

I'm late but I haven't been around much in forums lately so if you're still interested, this is my tumblr http://girl-with-no-faith-in-medicine.tumblr.com/

It started out as a Jack White fanblog but it kind of got out of hand. I still reblog a lot of him though, plus other music, and stuff that makes me laugh. Also some personal stuff. Basically, it's a mish-mash, but feel free to follow

my blog is a mix of just about anything you could imagine
mostly me complaining though
http://avidscribbler.tumblr.com/

Tumblr is the worst thing in the goddamn world. It's so bad. Everything on it is SO bad. That being said, I did make one so that I could see JerryTerry's post about Jon leaving Game Grumps. So I do have one, even though I've literally gone on it one time.

I do, but I'm not really an active member. I've posted maybe six things since joining. I am James Null. However, I must warn you that this is me completely uncensored, and I'm not sure how many of you can handle that. I swear a lot and discuss (im)mature topics. Here on ZD, since I'm in pleasant company, I tone down a lot of my... tendencies. Explore my profile at your own risk.

I made one like a month ago and never used it.

Today I decided to go back on and I found... my sister hacked it. Yeah, I'm not joking- look at this! 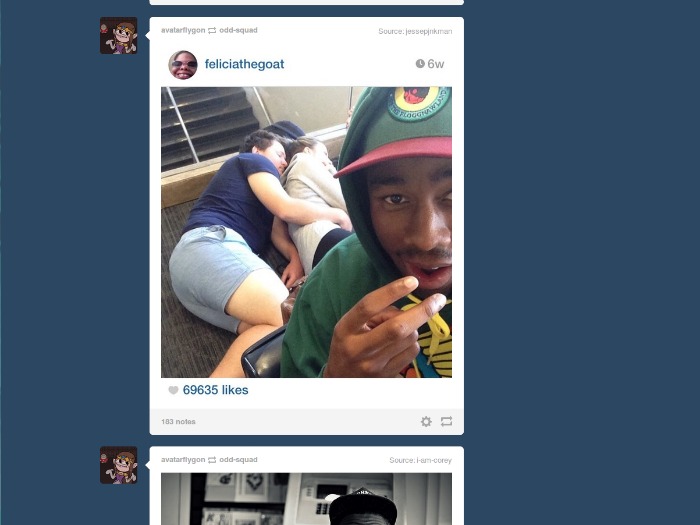 I didn't do that! And I know it was her because she stealthily and cleverly left behind a selfie.

Welp, going to go delete that account now.
You must log in or register to reply here.