Just a while back, politician Anthony Weiner had his career potentially ruined when "Sydney Leathers" called him out after receiving sexted images via Twitter. This is the next news outbreak as far as I can tell. But it makes me raise one important question: what does Anthony's sex life have to do with his ability to do his mayoral duties?

I honestly fail to see why this matters. I mean yes it's wierd, but it's his own personal life.

It's like judging a candidate based on their religion.

Location
In the wilds of Florida

We need to be able to trust our leaders not send crank shots to people. The thing is if he's gonna do dumb **** like that, what else would he do?

Honestly I don't care, I just wanted to post this. 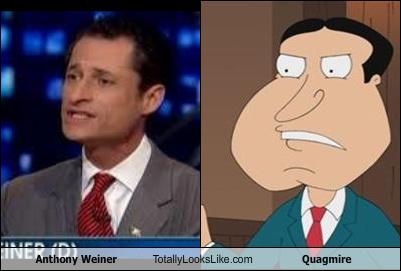 Mind if I use the reply that I used in this thread?


Wolf Sage said:
Simple answer: no. While I am against love affairs in general, political affairs don't get any special attention from me. Politicians are human, too, and as such, can succumb to lustful temptations. What goes on in their personal lives is no one else's business. However, if a hypothetical love affair were to negatively affect their job, then a scolding might be in order. But unless a given political figure is running a brothel, I see no reason why their actions should be considered any different from the rest of 'em, just because they're political figures...
Click to expand...

It has some indirect effects maybe such as pulling attention away from actual issues. Also the fact that someone could screw up like this twice makes me doubt his impulse control. More accurately I would say that this has very minor impact on his ability to govern, but anything that calls someone's integrity into question makes them less appealing to voters. However, in New York I doubt a politician's moral integrity makes as big a difference to voters as elsewhere.

Why do people care? I'd rather berate the people who thought this was worth a headline.

Future Soldier said:
Why do people care? I'd rather berate the people who thought this was worth a headline.
Click to expand...

Somewhat ironically, that's what I was doing this morning.

Even with knowledge of his scandals, I remember viewing a chart that said he was still in second place. THAT shows how little the people actually care, and how much the news is trying to blow it out of proportion.

I do think that the character of those who represent and lead our government is important.

Politicians are people to, so naturally, they can succumb to lustful temptations.

The media looks to blow such headlines out of proportion. It's another case of a large organized group defaming a candidate to put "their guy" in a position of power.
A

Exactly. He lived up to his name.

I find it hilariously ironic, his last name is wiener and he's in trouble for sending pictures of wiener, and not the kind that is also known as hot dog and frankfurter.

Usually I would say something similar to what Wolf and Alit have said. But if you have a last name like that, you very likely got laughed at as a child for it, so why on earth would you want to do something to make it happen again? I remember seeing on the news when this was being covered, there was a diner somewhere selling hot dogs called "anthony's wieners". This was after the first time. The guy did it a second time, I don't know if he knew about the wisecracking diner or not, but seriously...he has to be aware that his last name isn't helping matters.

I also find it sad how his wife is reacting: "He made a mistake, it was a bad idea, he will never do it again. This is an issue we as a couple need to deal with ourselves." The reporters had a psychologist commenting on it and he hit the nail on the head. "That's like a heroin addict saying they made a bad mistake and they won't do it again. He needs professional help." Anyway I doubt that this guy should even be in office, not necessarily because he was sending racy pictures to women who arent his wife, but because he continued to do so even after the public voiced their disapproval. What's going to happen when he has to make an important decision in the community? Is he going to go ahead and sign something into law if the majority voted against it? He obviously needs to work on his decision making skills.

You know, I had this thought. The thought that this discussion is COMPLETELY ironic in the sense that the same people who were incessantly jumping on Mitt Romney's case for being rich and attacking Romney's character are now questioning whether the character and personal choices of Anthony Weiner are relavent to mayorship. Because being unfaithful to your wife has nothing to do with being faithful to the people you serve and being rich has EVERYTHING to do with running a country.