Do you think anime is only for weebs and weirdos or are you a big fan of it? I personally don’t watch it. How about you?

I don't watch it for the sake of watching it. People put it into its own genre which is weird to me. "Hmm what should I watch, a horror, a comedy, oh I know an anime". There are very good films that hail from Japan and some of them happen to be cartoons. I prefer watching the older stuff as I enjoy traditional animation more, especially when you can quite clearly see a lot of effort has been put into it, I think that really adds to the experience.

Akira is a good example, some of the frames are so nicely detailed I could pause it and nod my head in satisfaction.

I haven't actually watched much anime outside the normal western kids shows growing up like Dragonball, Digimon and Pokemon. As an adult I've watch all the Ghost in the shell movies apart from the one where major has blue hair for some reason, and the TV series. Spirited Away, Blue moon, Akira, One punch man, Space Dandy, and Metropolis. I'm sure I've watch a couple others but can't remember at this moment in time.

Still, I don't understand the fascination some people have with it. Like there's that website called my anime list or something of that name that lets people share what anime they have watched with one another. I've never seen a website similar to that being shared around for movies in general.

Are people that watch anime weebs? Definitely the ones that watch it religiously. Many don't do well in the real world so retreat to a world that is furthest away from reality, in that world loser guys some how get big breasted girls that love them for being loser guys and everything is so omg random lol. Escapism to the max.

Didn't we have a thread exactly like this already?

Also, is the poll asking if we like Anime or if we think anime is for weeks?

I used to watch it much more often than I currently do, but I still enjoy it. One of the appeals is that it can differ in a lot of ways from Western TV shows (subject, type of humor, etc) and provides some nice variety, not to mention that I'm just familiar with the cultural background and invested in the subculture at this point. I can definitely understand if the cultural barrier is too strong for some people or if it generally doesn't appeal to their personal taste too, although it's diverse enough to the point where everybody should be able to find at least something they like. Watching anime alone doesn't make someone a weeb, but a lot of people do have an unhealthy focus on it and use it as a form of escapism.

Dan said:
Edit: Oh and especially the men that have anime avatars, degenerates.
Click to expand...

Home of the Dueling Peaks.

Location
The deepest, darkest pits of the Shadow Temple.

does RWBY count as an anime? if so, then yea

I updated the poll for clarity.

I like some animes, however I don't go out of my way to watch it or discover new ones. The only ones I've watched were the ones I saw on TV, mostly being the entire Dragonball series (Z, GT, and Super), and InuYasha. I don't mind if Pokemon is on, however I stopped watching years ago. As far as them being weebs or weirdos, I think that's just part of the anime culture. Anime reactions and expressions are exaggerated, and when people emulate that behavior IRL, it may seem weird, but to each their own.

I had almost the exact same title when I made this thread... We must be telepathic!

I hate anime with a passions 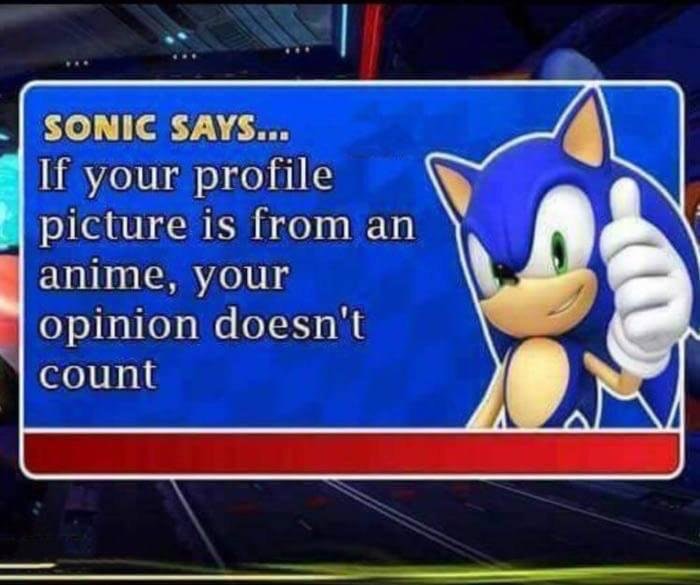 YIGAhim said:
I hate anime with a passions
Click to expand...

I like it. I enjoy the cultural influences and concepts over what we get in the west. Anime is just more creative and interesting for me to watch.

Do I watch and enjoy anime? Yes.

Should it be universally banned? Also yes.

I enjoy it a lot. It inspires a lot of creativity in me and it's just good entertainment. Well, most of them are. There are definitely lots of bad ones. I try to avoid ones with a lot of fan service and a lot of blood and gore. There are a few exceptions now and then, but having watched anime for as long as I have, it's perfectly understandable for people to hate it. At this point I've learned to navigate the ones that are actually good and avoid the trashy waifu bait aimed at basement-dwelling otakus who fetishize girls in sailor uniforms.

It's definitely influenced things I enjoy, particularly music. My entire iTunes library is anime soundtracks and theme songs, with some exceptions. The theme songs introduce me to artists I like, such as Aoi Eir, Man with a Mission, Fear and Loathing in Las Vegas, Aimer, etc. Hiroyuki Sawano and Yuki Hayashi feed my love for orchestral music with rock and electronic mixed in. Anime is undeniably the reason I listen to this stuff exclusively. Having said that, I don't curse my western heritage, I don't wish I were Japanese, and I don't think anime is superior to other mediums. It just ended up being one of the mediums I like best. If those things do apply to someone, that's when you get a weeb.

For starters, for the most part the fanbase is trash, the plots are kinda dumb, my sister ruined it for me just as I was dipping my feet into anime, the fanbase is once again 90% garbade (Just like Rick and Morty fan base), I don't like the over outgoingness of the characters (the characters in general are trash), I'm not a big fan of Japanese culture, and I think that's it for now. Mostly the fanbase ruins it, but all the rest are completely valid points that would stop me from watching even if it had a good fanbase. Also I refuse to watch any animated stuff other than Simpsons and Family Guy/Seth MacFarlane stuff. In a perfect world, animated stuff is only for kids and adult comedy, and Japanese comedy is downright horrible.

I have no problem with anime fans until they bring up anime. Even then I just let them do their thing and I keep quiet. It's a choice that I would never take
You must log in or register to reply here.