Animal Cruelty or Not?

Do you dress up your pets?

I vowed many years ago that I would never put my dog in a sweater, but recently the weather has turned, and my dog... is shivering. So I broke down and bought her a sweater for evenings when the house is cool (we are trying to save energy) or when we go outside and it's too cold.

My cat on the other hand, I have no problem dressing up. In fact many a times I have stuck doll's clothing on her.

So what do you guys think? Is it cruel to dress up your animals, or just something quirky to do?

Unless the cloths are too small and they suffocate your pet I wouldn't consider it animal cruelty. Like you said, dressing them up can keep them warm making it the exact opposite.

Depending on the circumstances, it can/can't be counted as animal cruelty.

In the Winter, most animals are cold and dislike going outside, so instead, most dog owners put some sort of covering on their pets, while most cat owners decide to keep them inside, due to cats being incredibly unco-operative when it comes to dressing them up with their best needs in mind.

The only circumstance in which dressing up animals is considered to be extreme or cruel is in which the clothing is too heavy or too small for the animal in question. I have often complained to my friends about putting belts on their dogs instead of collars, actively choking their pet. My grandmother's dog has a permenant indentation around its neck due to her putting on the collar too tight. This is considered cruelty in my opinion.

Some people put dolls clothes on dogs. Dogs have a much larger body than cats, so it immediatley restrains their blood circulation and breathing. It is people who do this to their animals that deserve to never be able to own another pet ever again. How would they -a fullgrown human being, like being dressed in baby clothes? It's the same principal.

I think that dressing them up is fine as long as you do not go too far..

I don't really think it's animal cruelty. I dress my cat up all the time if he doesn't mind. I think if you force the animal against it's will into something painful and humiliating, then it would be kind of cruel...

But just putting a sweater on a dog so it isn't cold or dressing up your pet for Halloween doesn't count as animal cruelty in my book.

is climbin' in yo windows

I think it depends on the animal.
We'd like to be able to say "All cats don't mind wearing hats, but hate wearing boots." I don't think that's really the case. Of my two cats one doesn't mind wearing her giraffe hood, but the other starts flailing around trying to get it off. I think that animals make it pretty clear if you're being cruel or not.

I think that generally, animals who are rewarded for good behavior and who are calm at the appropriate times would be more willing to wear a costume, where as misbehaved animals who maybe don't get as much attention would have more trouble sitting still and wearing a costume.

So I think it's a combination of those two things, or at least, that's my experience with animals and costumes.

I'd say it depends on the animal in question. If you're doing something the animal doesn't like, and you continue to do it regardless, then yes, that can be considered cruel in a way.

To start with, if you're just giving them some clothes to keep them warm, and they don't show any signs of discomfort, ie trying to bite or scratch the clothes off, then there's nothing wrong with it. You're likely doing them a favor by keeping them protected against the elements. And as long as it's not too small as to cause discomfort or too loose as to impair motion or something else that the animal clearly does not like, there isn't much a problem with it.

On the other hand, if the animal does show signs of discomfort, or you're dressing them up simply to annoy them or for your own amusement, ie cats with bag-like "shoes" on their paws, then that's just plain mean. I wouldn't call it cruel unless the animal is clearly uncomfortable and you continue with the dress up. In any other case, I just call it being a jerk.

If the animal doesn't respond at all to the clothes and you can't tell if it's comfortable or not, I personally wouldn't do it since it just seems...unnatural to me to dress them up. Like with my cat, if I were to dress him up, even if he didn't protest I bet he wouldn't be too happy getting his fur all ruffled like that. I figure I can just dress up my stuffed animals if I want that kind of entertainment. I don't see it as mean or anything if the animal doesn't respond, at least not any meaner than say...putting a pink bow in your brother's hair just to mess with him, just not something you should do too often unless the animal clearly likes it.

This is a news story about a cat that likes to model. Here's the picture from that article, just because. 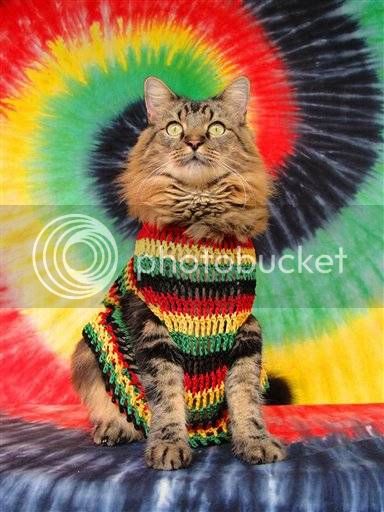 In any case, I think it depends on the pet's personality. If they obviously don't like it, then yes, it's a kind of cruelty to force them. But if they don't mind, more cute pictures for us humans. I have an old picture of one of my cats from childhood somewhere of him wearing a watermelon tank top that I decided he would look cute in. He just tolerated like some animals are really good at doing when children don't quite get how to interact with them.

ETA: Just to be clear, it states in the article that the cat likes to dress up and actually paraded around in the owner's laundry before she started designing things specifically for him. *lol*

Also, for those who don't read the article, "Lorenzo does have a couple of rules — no pants, no hats and the top button on a shirt has to stay open." Which is why the above picture seems to be an anomaly. I just find the cat funny, though.
Last edited: Oct 9, 2010

February Eve said:
This is a news story about a cat that likes to model. Here's the picture from that article, just because.

In any case, I think it depends on the pet's personality. If they obviously don't like it, then yes, it's a kind of cruelty to force them. But if they don't mind, more cute pictures for us humans.
Click to expand...

I personally think that cat looks like it's being suffocated. Just look at how that skinny jumper thing is crushing its body, forcing the flesh upwards.

As long as its just too keep them warm for winter I don't view it as cruelty.But if its too tight and is hurting your pet then yes that's basically Animal Cruelty.I would rather protect my dog against the cold Weather by wearing something warm then just letting them be cold.

arkvoodle said:
I personally think that cat looks like it's being suffocated. Just look at how that skinny jumper thing is crushing its body, forcing the flesh upwards.
Click to expand...

See my ETA. Also, it's a maine coon breed. I used to have one of those. Lots of fur and a huge mane. Most of her other designs are more open but that particular one is probably not squishing its body so much as keeping its fur from sticking out, heh.

arkvoodle said:
I personally think that cat looks like it's being suffocated. Just look at how that skinny jumper thing is crushing its body, forcing the flesh upwards.
Click to expand...

I'm almost certain that that is a longhaired breed (for some reason I'm thinking Maine Coon, idk, it just looks like a longhair), in which case that's not flesh, just fur, and it's not suffocating, just getting its fur all ruffled. Whether it likes being in that sweater or not I can't tell...

EDIT, Eve beat me to the punch, and YES, it WAS a Maine Coon (idk why I find it hilarious I recognized that XD )

Some dogs and cat will need clothing to keep warm, especially the shorter to no hair breads. It's best to look up all data you can on you pets care.

Putting clothes on pets and animals cruel? Well that can be more of a case by case I suppose. But if the pet is unhappy and stressed by clothes that are just for the owner's entertainment then, it is cruelty. But more of a minor scale.
Last edited: Oct 9, 2010
L

Ask Me Why I Love The Photoshops

I do not think that dressing your pet in clothing would technically be considered animal cruelty. The way I look at animal cruelty is that if you abandon, abuse, or do rude things to them, then that's animal cruelty. I have always thought of animals of people, because that's what they are. The only differences between animals and human beings is that they are covered in fur, lower to the ground, and don't speak any type of language that we could understand.

Dressing your pets is just like dressing ourselves. We wear sweaters in the winter and autumn seasons when it's a bit cooler out. We wear shorts and short-sleeved shirts in the spring and summer seasons when it's warmer out. Animals do the exact same things that humans do to adapt to their surroundings and temperature. If you put a dog in a sweater so they stay warm, think of it as you putting on a sweatshirt to do the exact same thing, and when you put no type of clothing on your pet, so they stay cool, it's the same concept of how we wear lighter clothing to stay cool.

Humans and animals are more alike than we would sometimes like to believe. Dressing animals in clothing for show or for warmth makes the fact even more valid. Dressing them up, again, I don't think is cruelty. It's just our way of making sure they are kept warm and fashionable at the same time.

In addition to that, I would like to add that animals have feelings too and when we do dress them up, we should take into consideration if they like what we are putting on them. I mean, think about it, if you were to dress your cat or dog in a sparkly gown or bunny suit, etc., put yourself in their paws and think. Would you go out in public like that? Ten to one odds the answer is no. So if you dress your pets up, think about what you're dressing them in and think to yourself, would I wear that? Then, go on from that point.
Last edited: Oct 9, 2010
You must log in or register to reply here.